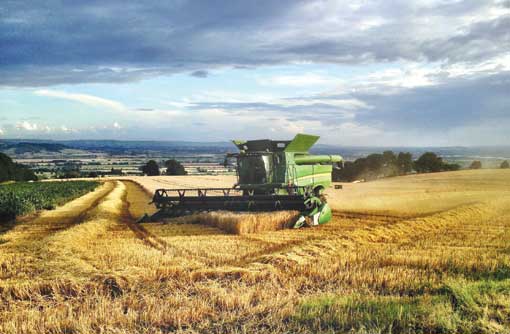 Normally Overbury Farms has sold around 40% of wheat and oilseed rape forward by this point in the year, but after the experiences of 2012 the situation is much different.

Just 20% has been committed ahead of this harvest as farms manager Jake Freestone tries to juggle yield uncertainty and reduced crop areas with the need to secure a profitable return and manage tight cashflow across the business.

“Last year we committed about 40% of expected tonnage before harvest, but because yields were down by a quarter that proportion actually ended up being nearer 50-60% of what was actually in the barn,” he explains. “That didn’t give us as much flexibility for marketing grain later in the year to manage cashflow and I was keen to avoid a similar situation this year.”

Winter wheat area is 20% down due to the wet weather last autumn and while some has been recouped with 40ha of Mulika spring wheat, the overall wheat tonnage available will be lower, he says.

The winter wheat area is split roughly 50:50 between Group 1 varieties Solstice and Gallant, plus a field of Crusoe, and the Group 3 variety Invicta.

Some Mulika and Kielder is also being grown on seed contracts for the first time in a bid to try new markets. Mr Freestone hopes that if this harvest and autumn establishment go well the business can get back to selling nearer 40% of wheat and oilseed rape forward for harvest 2014.

This leaves another 40% to be sold between harvest and Christmas and about 20% to “take advantage of possible later or local markets” in the new year.

“We know within £4-5/t what our cost of production is from all the costings and yield data collected throughout the year, so if we can get a budgeted price over and above that, then it’s worth locking in to. That may not be for delivery until May the following year, but we’re fortunate to have the storage facilities to hang on to grain if needed.”

Overbury has about 6,500t of bulk and bin storage across the farm, allowing more flexibility as to when grain is sold.

The exception to that is winter malting barley, which tends to be moved immediately after harvest, he notes.

Being part of the Molson Coors malting barley grower group means that Overbury can benefit from preferential lorry movements and the contract also allows barley to be sent at 16% moisture with no deductions, Mr Freestone explains.

“Once we’ve got the crop in and know the quality’s there, I’d rather move it straight off to the maltings to be dried and stored at their own risk rather than mine. In terms of aiding harvest logistics, it’s a good crop to have.”

Some 1,000-1,100t of winter and spring barley is sold on the Molson Coors contract, which requires a fixed tonnage to be committed for three years. The proportion of winter or spring varieties within that can be varied, though.

There are three different pricing options available: a fixed price calculated in March/April for the following harvest; a premium over wheat futures; and a delivered-in-June/September market value.

“The contract stipulates that we must put at least one-third of our tonnage into the latter market value option, but the rest can be spread among the other options. We tend to go for one-third in each. The fixed price for this coming harvest works out at £171/t for winter barley and £175/t for spring,” says Mr Freestone.

“The market value price is the one that tends to have the biggest effect on the overall average and I fear that this year it might drag it down given how the season’s gone. But in other years it’s gone the other way, so you just have to take it on the chin and move on.”

For the first time last year, Mr Freestone sold 30% of his wheat, equivalent to about 1,000t, through Frontier’s grain pool.

“Because of the price fluctuations around the world, it seemed the logical way to spread risk on a proportion of our grain,” he says. “You can use all the technology and apps you like to get closer to the market and monitor what’s going on, but ultimately as a farmer, you’re not doing it full-time, so the pool option is a good way of handing that over to the experts.”

The tonnage was split evenly between Frontier’s October to December pool, which delivered a feed wheat base price of £180.12/t + £30/t milling premium, and its January to March pool, which returned £185.15 + £27/t.

“It worked out pretty well for us in the end, as most of the pool wheat was milling quality, so it attracted the premium. We’re using the pool again for harvest 2013, but I’ve reduced the tonnages to nearer 300t in each pool.”

Mr Freestone is concerned that because many millers supplemented domestic milling wheat with imported supplies last year to make up for the poor UK crop, they may have plenty of coverage going into the new season, which could put pressure on prices.

“I don’t think £25/t is enough for milling wheat premiums as it is, given the extra costs involved. We really need to be looking at a minimum £30/t premium. It would also be nice to see millers set up grower ‘clubs’ like the Molson Coors group.”

Harvest 2012 saw Group 1 varieties sold as conservation grade milling wheat through Frontier Agriculture. “Our Higher Level Stewardship scheme arable in-field and margin options help us qualify for this, which is another useful premium to have.”

The price is calculated with a £7/t premium over a London International Financial Futures Exchange (LIFFE ) price in addition to the milling wheat premium.

“We’ve been LEAF Marqued since July 2007 and went into it because it was the right thing to do for the environment and for where we wanted to take the business in terms of becoming a LEAF demonstration farm,” says Mr Freestone. “We’d never had a commercial advantage from the LEAF Marque until last harvest, so it’s the icing on the cake to get that premium.”

Some 800t of oilseed rape was sold through ADM last year, although tonnage will be down to nearer 400t from this harvest due to the lower area, he says.

As with the wheat, around 40% of rape is usually committed before harvest, with the remainder sold when needed later in the year to help balance cashflow.

“We often move rape early if we need to. In some cases we’ve moved it off farm in November when the crushers needed it, but fixed the price later in the year because we didn’t actually want to sell at the time. It’s good to have that relationship and flexibility to work with buyers.”

Beans are another crop that can be useful for helping to balance cashflow, he adds. “Yields can be unreliable, though, so we tend to wait until it’s in store before selling anything. Last year we grew Wizard winter beans with an eye on human consumption markets, but bruchid beetle is often a problem, so invariably they go for feed.”

Synchro and Fanfare spring beans replaced Wizard for this harvest and Mr Freestone thinks this may be a better option in the future, as it gives time to establish a fodder radish/Phacelia cover crop behind the combine, providing winter grazing for sheep and soil benefits when incorporated in the spring.

Mr Freestone says it is vital to have a good working relationship with grain traders and not to let it become tarnished by disputes over relatively minor claims.

“Last harvest, for example, was particularly challenging for specific weights, where we had some down to 67kg/hl and took a bit of a knock on price.

“But we signed up to the contract knowing full well what it is, so we just had to get on with it. It’s down to the merchant to find the best home and price they can for that grain.”

He recognises that grain testing can sometimes be another area of possible conflict between merchant and farmer, although he has so far never experienced problems himself. “We sample every trailer load ourselves straight off the combine and these eventually go together for a combined sample that can be sent away for analysis. We re-sample the heaps later in the year to get a better idea of the dried store composition, so we can market that accordingly.”

Soil is focus of water management at Overbury Farms