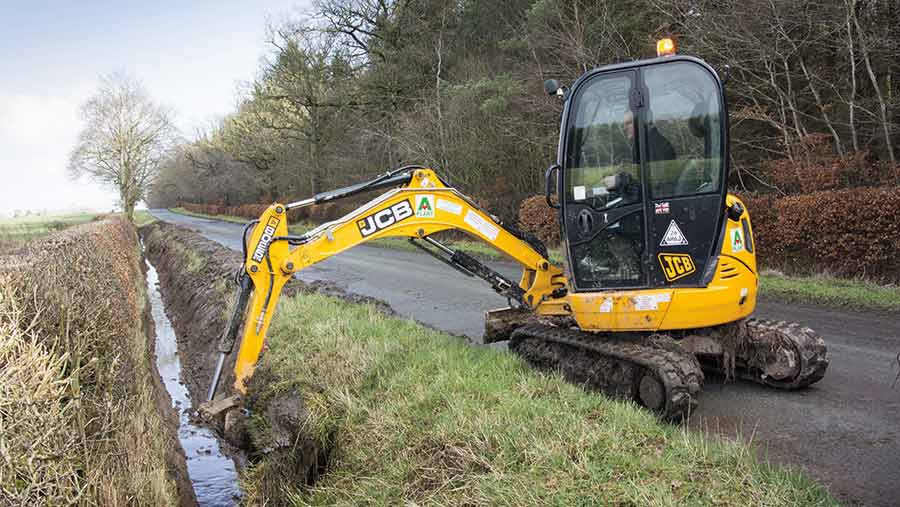 There is no hard and fast rule for where the boundary lies between private land and the highway. Country Land and Business Association’s Andrew Gillett explains how to deal with common boundary issues.

Finding the boundary line between a property and a highway can be complex, requiring research of historical documentation and often specialist advice.

But there are situations when establishing the extent of the highway is necessary, such as the erosion of landbanks by passing cars on narrow roads, issues with access to the highway and potential ransom strips or the maintenance of trees and vegetation.

Within the extent of the highway

There is a difference between property ownership and what is “within the extent of the highway”, and the two can overlap.

When looking at who can exercise control over the strip of land immediately adjacent to the highway, often the important issue is the extent of the highway.

Landowners have often heard of the “ad medium filum” presumption that landowners adjoining the highway own up to the mid-point in the road, unless it can be proven otherwise. Land that has been compulsorily purchased is one example of when the Highway Authority will usually own the land outright.

What is less well understood is that this ownership is subject to what is vested in the Highway Authority for a public right of way – the surface and as much of the subsoil as is necessary for the control, protection and maintenance of the highway.

The landowner retains mineral rights, rights to deal with the subsoil and in certain cases the right to restrain acts that go beyond the normal use of that highway.

The one metre myth

Frequently, landowners believe that the Highway Authority controls land only within one metre of the road, but this is a myth, says the CLA’s solicitor, Andrew Gillett.

But the extent of the highway will depend entirely on the individual situation.

He says that the law is complex and a declaration from the courts as to the extent of the highway is sometimes the only way to be sure of the width in any given area.

The boundary of the highway could well be the fence, hedge or wall running parallel with a road, but when verges are wide, on different levels or land is unfenced, a defined boundary to the highway may be more elusive.

Land deeds tend not to show ownership of the highways. Mr Gillett says that the first place to start is the county council or unitary authority, as this is usually the Highway Authority for small, rural roads.

It will often provide guidance on what it considers to be the extent of its land, but often this is not based on detailed research.

If you don’t agree with the council’s position the next step is to look at historical documents and the public’s historic use for all evidence of the width of the highway, says Mr Gillett.

“Neatly tarmacked roads running through fenced land is a relatively recent development,” he says. Many rural roads are of ancient origin and would have originally passed through a very different landscape.

The roads themselves are likely to have been wider than just the tarmacked area in the past to allow carriages to pass each other, and many highways would have been unfenced until a couple of hundred years ago.

Due to their ancient origin, it is possible that no written document ever existed specifying the lateral boundaries of a highway.

How to define the edge of the highway

In areas without any apparent boundaries, a well-worn track or metalled surface will be presumed to define the width of the public highway.

Where roads have fences or hedges on both sides that have been set out with reference to the highway, the law will presume that all the road and land between those two boundaries is part of the highway, unless it can be proven otherwise.

For example, if it can be shown that the boundary feature was constructed before the highway.

Other similar land in the area can also be used to help determine the width of the highway. For instance there may be many other examples in the locale of strips of land running alongside the highway being in private ownership.

Evidence that the verge or strip of land was considered manorial waste has also been considered relevant.

Where there is a ditch, the presumption is that this will belong to the adjoining landowner, but this can also be rebutted by evidence, such as where the ditch was built to drain the highway.

For some farmers, land being eroded by passing cars is a big issue. If the bank or verge is considered to be within the highway extent then the Highway Authority can place bollards or works to protect the bank from further erosion.

But in the current climate, with Highway Authority budgets under pressure, this may be viewed as a low priority.

Mr Gillett recommends contacting the parish council and county councillor about the matter to try to gain their support, as this might help.

If the bank or verge is determined to be in private ownership, then the landowner can undertake remedial works himself but this must be done in consultation with the authority.

Mr Gillett says any work done to the land beside highways that is considered to be a danger to highway users or that subsequently falls into disrepair so as to cause a danger, may lead to a claim against the landowner. The law has always taken great care to protect those who use a highway.

How to tell who owns a tree

There is an obligation on tree owners to ensure any visitor to property, either lawful or unlawful, is reasonably safe when visiting land, says land and property firm Robinson & Hall.

If negligence is proven on the tree owner’s part, considerable claims can be made against them by the injured parties, it warns.

Determining tree ownership is more straightforward than highway boundaries – trees are part of the land on which they were planted, even if the roots, branches or trunk cross a neighbour’s boundary.

Branches, fruit and even leaves are the ownership of the landowner, whether attached or detached.

Tree owners whose trees are close to public rights of way or highways should consider hiring a qualified arboriculturalist to survey the threat posed to a passer-by. Trees can then be ranked in order of risk from low to very high.

Robinson & Hall says it is a common misconception that a resident has a “right to light” in their property or garden. This is not always the case but it can be acquired under an easement if light has been uninterrupted for 20 years. There is also no “right to a view” and a tree blocking a view cannot be regarded as a nuisance.