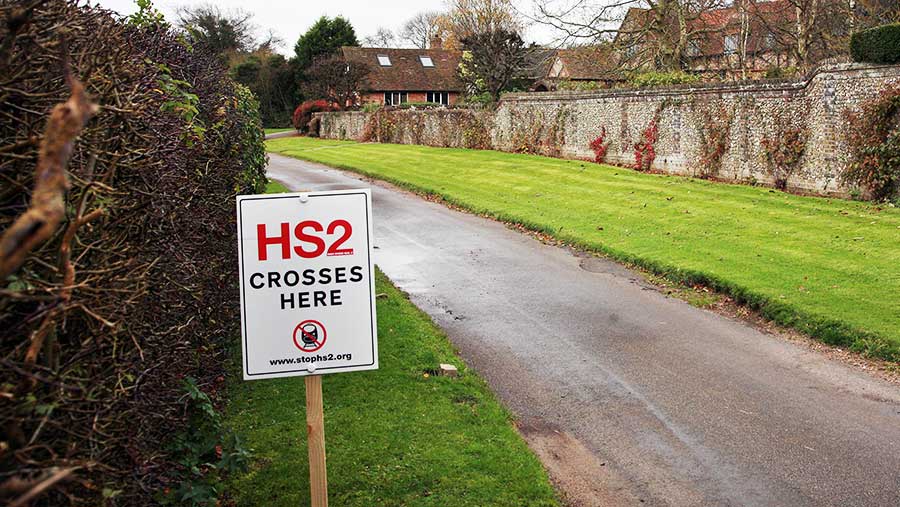 The information was issued in guidance for agreement holders on the HS2 link between London and Birmingham released by Natural England on 4 August.

It warned that land taken by compulsory purchase for the HS2 link would no longer qualify under agri-environment scheme agreements.

Where this is the case the agreement holder will be deemed to have failed to comply with the five- or 10-year commitment that the schemes require.

See also: Changes to compulsory purchase and what it means for farming

Any money paid out under the scheme will be recovered in these cases, Natural England said.

However, landowners who took out agreements before the HS2 Bill received Royal Assent on 23 February 2017 will be able to claim force majeure rights.

This is because they could not have foreseen accurately how much, or where, land would be taken.

Providing these landowners apply for exemption within a 15-day window of receiving the purchase order they will not have to repay the funds they have received for the area affected, Natural England explained.

But Country Land and Business Association chief surveyor Andrew Shirley said that a 15-day window was not enough.

“There will be no warning of the purchase order arriving on the doormat.

“As soon as it does, the clock is ticking and the landowner will have just 15 days to submit an application for exemption under force majeure,” Mr Shirley said.

Farmers may be in the middle of harvest or lambing time, or may be away when the letter arrives, he pointed out.

“Juggling farming with paperwork, phone calls and emails puts the landowner under intense pressure at these times,” Mr Shirley said.

It will be down to them to ensure that the Rural Payments Agency is informed.

“Once again we are seeing the onus placed on the shoulder of the small business owner rather than the giant bodies who are responsible for creating the issue in the first place,” he added.

Businesses that took out agreements after Royal Assent was granted will not be allowed to claim force majeure.

These landowners will be expected to have known where the HS2 line would run before the agri-environment agreement was signed, Natural England added.