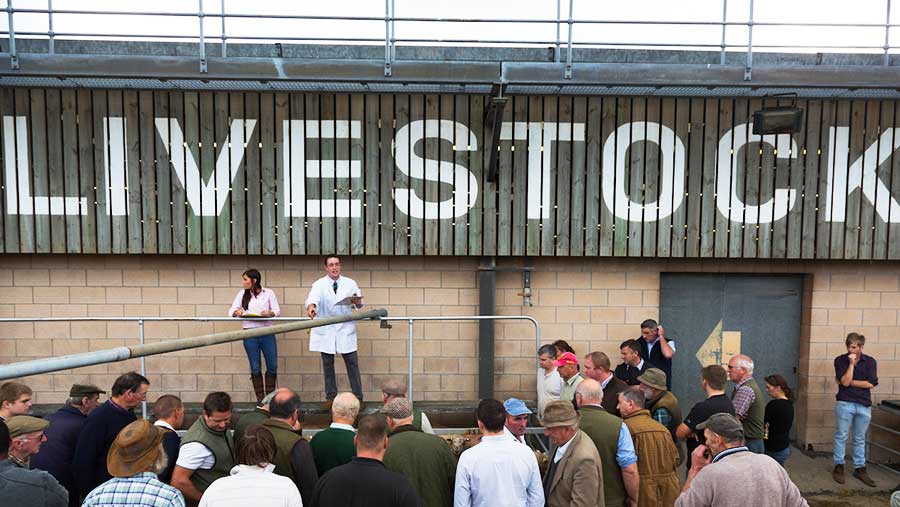 Livestock markets are among a range of rural businesses facing “alarming” increases in business rates from 1 April, raising fears of higher commission rates and even threatening the future of some sites.

Statistics produced by the Valuations Office Agency (VOA), show that livestock markets in England are facing an average increase of 86% in rateable values as part of a national review of all rates on commercial properties.

Rates are calculated by applying a “multiplier” of 48p for every pound of rateable value. A slightly lower multiplier is applied to calculate rates for small businesses.

See also: How to check your new business rates valuation

Chris Dodds, executive secretary of the Livestock Auctioneers Association (LAA) said that some marts were looking at a three-fold increase in rateable values. Some that had invested in new modern premises were among the worst affected.

“Small and medium-sized markets won’t see too dramatic an increase – it is the larger markets that are looking at the biggest increases,” he said. “It is very alarming and it threatens the sustainability of the industry.”

John Royle, chief livestock adviser for the NFU, said he was concerned markets might look to pass on the extra costs through increased commission rates.

“Livestock markets provide an extremely valuable service to producers and provide much-needed competition. Anything that increases costs along the supply chain further erodes fragile margins in the beef and sheep sectors.”

Melton Mowbray Market in Leicestershire is one of the businesses that has been hit with a huge increase in rateable value – from £183,000 to £282,000.

Chief executive Hugh Brown had been aware rates were likely to increase, but said the scale was beyond what anyone could have imagined.

“It is a massive increase and if it remains as it is, then it undoubtedly is going to be passed on in some way,” he said.

Roger Lightfoot, director of Hobbs Parker, which runs Ashford Market in Kent, said the VOA’s proposals meant they were looking at a rise in rateable value from £125,000 to £260,000.

“We’re lucky in that we are a diverse business, but I do fear we will see market closures elsewhere as a result.”

“It [any increase] should be fair and reasonable and I think it is neither,” said Mr Addison.

“It is a hefty hike and for what I don’t know,” said director Jonathan Evans. “It is an unjustifiable cost in a struggling industry.”

“This increase in costs, along with increased staff, input and compliance costs will increasingly make it a challenge for a farm retailer to make a profit.

“We approach all classes of property fairly and equally, and always use recognised methods to set rateable values.”

Many diversified farm businesses will be hit by the revaluation but land and buildings used for agriculture are exempt from business rates.

Simon Holland, a partner in Washingpool Farm Shop, near Bridport, Dorset, said he had been shocked to find that their rateable value had increased from £13,750 to £24,500.

“It comes at a time when there is an increasing burden on small businesses, for example, dealing with new pension requirements. It is a high jump when we can see no extra benefits to the business.

“We are seeking advice on challenging this.”

Nigel Pulling, chief executive of the Great Yorkshire Show Society, said the organisation was facing a 19% increase in rateable values from £443,000 to £528,000, although as a charity it benefited from significant relief. However, it runs a separate caravan site which faces a 40% increase in rates.

“It’s disappointing to receive these increases as it is a cost and will restrict what we can do in terms of our charitable activities. Like all businesses we understand that rates need collecting, but it can appear quite arbitrary,” he said.

Business owners are advised to check the basis of the new valuations which can be challenged before 1 April when they take effect. After this there is a formal appeals procedure which is likely to be a more lengthy process.