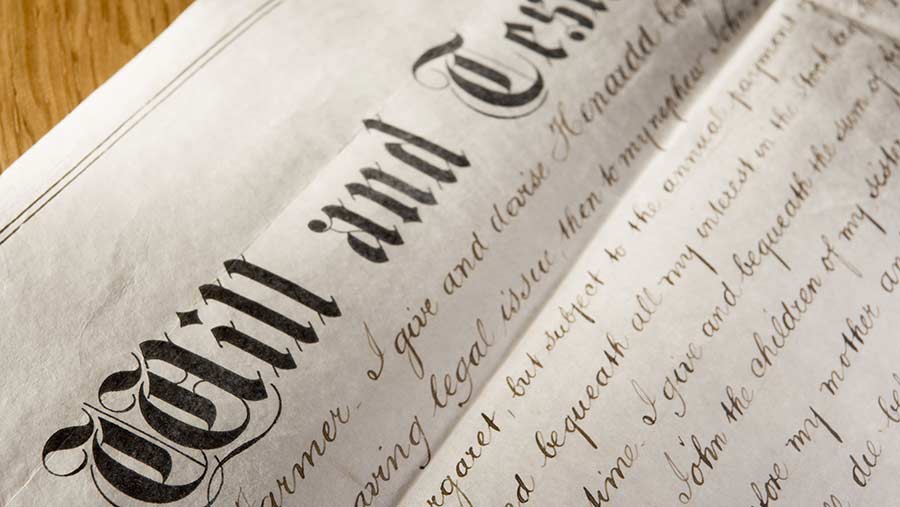 Farming families will be hit hard if the government succeeds in pushing through a massive hike in probate fees.

The cost could rise from the current £150 flat fee to £20,000 for estates worth more than £2m, which would include most family farms.

The move is outlined in a government consultation designed to raise an additional £250m/year.

Solicitor John-Paul Dennis of north-west law firm Kirwans said the farming community was likely to be disproportionately hit by the changes, which could prove disastrous for those who were to inherit.

See also: How to tie up legal and tax succession issues

While farms were high in value, that value was tied up in land, buildings and livestock and cash was often short.

“In many cases, this will mean those seeking to administer agricultural estates will need to borrow against their own assets,” he said.

The proposals also brought other dangers, including the risk that people may be tempted to cut corners rather than seek proper legal advice, said Mr Dennis. There was also a danger that more estates would remain unadministered.

“These new rules may result in increased pressure from family members to transfer property many years before they expect to die, an act that would leave them extremely vulnerable financially in the final years of life, as well as, of course, meaning that the government may not be able to use the estates of older people to subsidise fees for things such as residential homes, something that is certainly not in the interest of the state.”

Many legal professionals were objecting to the proposals, said Mr Dennis. “The probate registry is one of the most efficient parts of the court system and does not cost the taxpayer a great deal of money.

“In fact, prior disclosures by the government show, if anything, the registry makes a modest surplus based on its current charges, and similar organisations such as the Office of the Public Guardian and Court of Protection have been tasked to be cost neutral, hence our bewilderment at the huge spike in proposed fees.”