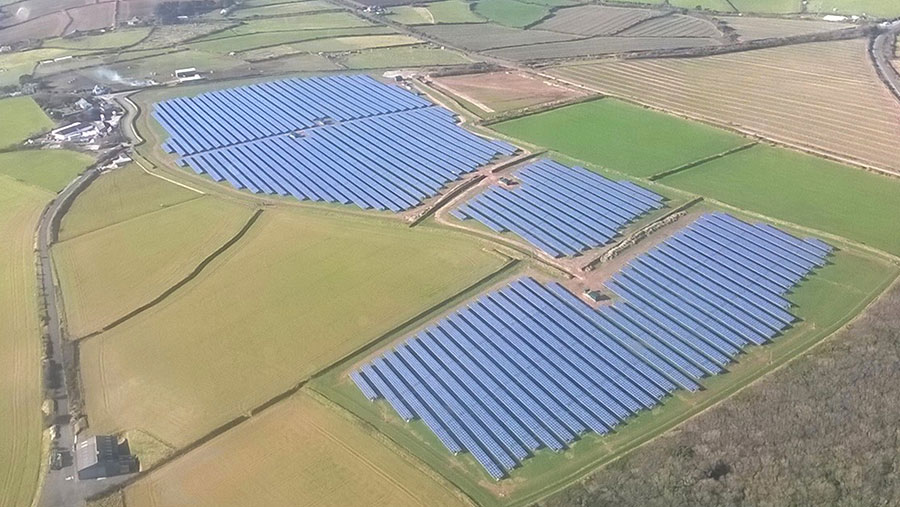 Gover Park solar farm in Cornwall was developed in 2013

An energy company is seeking approval for a huge 40,000 panel, solar park on farmland in Scotland.

Green Energy International (GEINT) is in the early planning stages for its solar farm at Patrickston Farm, near Gargunnock in Stirling.

The company has sought a “screening opinion” from Stirling Council planners to see if an environmental impact assessment will be needed for the development.

The 17ha site is suitable for a 10MW grid connection, which equates to 37,836 solar panels.

The fields are used for pasture and silage production. The landowner is free to continue grazing after the development process has been completed.

The main environmental considerations are reportedly landscape and visual impact, flood risk and traffic or roads.

It is expected a detailed flood-risk assessment will be needed as Scottish Environment Protection Agency flood maps identify parts of the site as medium to high risk.

Lisa O’Farrell, GEINT managing director, said: “Green Energy International is working to develop a number of solar farms along the east coast and central belt of Scotland where the levels of available sunlight are enough to support this kind of sustainable and renewable energy generation.

“This potential project at Patrickston Farm is at a very early stage of assessment. All of our solar parks are developed and built with the knowledge that they will be returned to their original state after decommissioning. Wherever possible, we employ local contractors.”

Gover Park solar farm covers 17ha at a site in Cornwall and was developed in 2013. The site was built within 12 weeks and generates enough power to supply 6,000 homes.