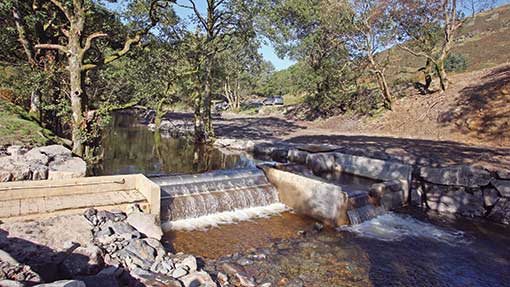 Even with the latest cuts to Feed-in Tariffs (FiTs) support, a well-designed hydro project should still deliver a payback of about seven to eight years, says Elgan Roberts of Carter Jonas.

“Hydro is certainly not a straightforward technology and every scheme has to be individually designed, but there is still good potential on the right sites,” he says.

The technology is not limited to upland areas. Potential power output and viability of any scheme is a function of two key factors, namely height (head of water) and flow rate (cubic metres per second). Varying combinations of these can deliver worthwhile returns.

“In the case of a small, narrow stream, you might need a head of at least 20-30m to make the project work, whereas a wider river with higher flow might only need a drop of 2-3m. In any situation, the key is to have a consistent flow all year.”

River flow can be estimated as part of an initial desktop feasibility assessment, but it may be worth checking estimates with on-site measurements throughout the year, adds Keith Tibbitts of hydro and wind company Renewables First.

Grid connection and land ownership can be two of the biggest limiting factors. A nearby three-phase supply and spare grid capacity is needed for most projects, but is not necessarily a deal-breaker, as split-phase electric may be suitable for smaller projects (c 15kW), says Mr Tibbitts.

Where a watercourse forms the boundary between two farms, formal permission from the neighbour will be needed, Mr Roberts adds.

Project costs are roughly split equally between civil costs, fixed costs and equipment, although exact figures vary much more than other technologies. Experience from hydro projects that Carter Jonas has been involved with suggests most come in at about £2,500-5,000/kW of installed capacity.

“Low-head and smaller (c 10kW) schemes tend to be towards the higher end of that range, while larger (c 100kW) projects tend to be nearer the lower end per kW.”

Once a site has been identified, licencing is the biggest hurdle for hydro developers. An Environment Agency abstraction licence (or Scottish equivalent) is required to ensure there are no adverse effects on the river downstream and this will limit how much water can be used.

“It’s worth checking whether there are any other abstraction licences along the river, as that may limit whether another licence can be granted,” says Mr Roberts.

An environmental audit also needs to be completed to examine the potential effect on a number of areas – for example, fish, water quality, biodiversity, flood risk and navigation.

“Wherever possible, the EA is trying to remove barriers to the upstream migration of fish, so it’s almost standard practice now to incorporate a fish pass into any scheme, unless you can prove there are no fish in the watercourse,” says Mr Tibbitts.

Licencing and relevant site surveys mean projects normally take much longer to get commissioned than more straightforward technologies such as solar or biomass. “Typically you might be looking at one to two years to get everything in place before construction can begin, so factor this in when looking at potential future FiTs cuts,” Mr Roberts says. “But once you get consent and pre-accreditation, you do have up to two years to build the scheme, whatever size it is.”

Local authority planning permission will also be required, but in many cases this may be more straightforward than for a wind turbine, says Mr Tibbitts. “Once installed, hydro schemes are relatively unobtrusive and very quiet. One of the biggest planning challenges is often the environmental effect of any channels or pipes that need to be laid.”

Hydro projects will be designed around the specific site characteristics and turbine types will vary accordingly.

For any system, Mr Tibbitts says it is worth paying particular attention to the intake screen that prevents fish or debris from entering the turbine, which must be kept clear to maximise flow. “It’s worth considering an automated screen cleaning system, otherwise you could end up spending a lot of time checking and cleaning it yourself.”

Flooding is a potential risk, so sites should be designed to ensure generators and electrical equipment are above the flood level and bypass channels may be needed to divert flood water, he says.

Thought should also be given to the timing of any construction work, as this is often restricted to summer months for weather-related or ecological reasons.

Hydro schemes are not limited to upland areas, but consistent flow is key.

Learn more about green energy opportunities by visiting the renewables zone at the Livestock Event. This year’s event will take place on 2 and 3 of July at the NEC in Birmingham. Visit our Farmers Weekly Livestock Event page or the event page  or call 0845 458 2711