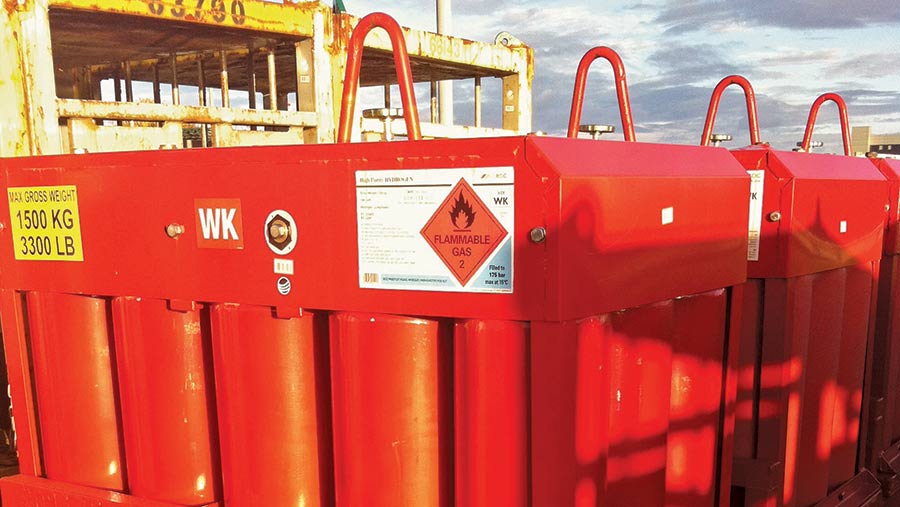 The potential of hydrogen fuel cells to revolutionise transport fuel has been talked about for many years.

However, recent improvements in the technology and increased uptake suggests meaningful change is finally on the way that could create opportunities for farmers.

Almost every car manufacturer is developing fuel cell prototypes and several firms already have hydrogen-powered cars on the road.

Hydrogen-fuelled vans, buses and lorries have also been developed, with a number of local authorities across the UK running small fleets.

This growing demand for hydrogen creates exciting opportunities for farmers, according to independent consultant Iain Todd, who is working with Bright Green Hydrogen to develop the technology at the innovative Levenmouth Community Energy Project (LCEP) in Fife.

“Farmers have always produced goods to supply the urban environment and this could be the next step on for that,” he says.

The biggest opportunity for farmers will be in generating and supplying hydrogen on long-term contracts to local authorities or companies running fleets of fuel-cell vehicles, although there could be more direct farm uses for hydrogen in the future, he believes (see below).

The high energy requirement of hydrogen production – 1kg hydrogen requires 60kWh of electricity – means it is most suited to farmers that have renewable energy generation on site, says Mr Todd.

Systems could be connected to an existing energy generating site or developed around a new project, he says. This could allow projects where grid connection is prohibitively expensive or there is insufficient capacity, to proceed “off-grid” by using electricity to produce hydrogen, which can be stored and sold into different markets, he says.

“It’s extremely advantageous to be able to store electricity and hydrogen is a good way of doing that. Once stored, it can be used in a number of ways, such as to fuel vehicles, convert back to electricity, or for heating, although the economics of the latter are less favourable at the moment.”

How the technology works

Hydrogen is produced using an electrolyser, which splits water into hydrogen and oxygen gases. The hydrogen is then purified and stored in high-pressure tanks, while oxygen is released to the atmosphere.

The quantity of water required is small, with just 1 litre of water producing more than 1,000 litres of hydrogen. In energy terms, 1kg of hydrogen is roughly equivalent to 6.8-9.0 litres (1.5-2 gallons) of petrol.

Two types of electrolyser are available; PEM (Proton Exchange Membrane) and alkaline. PEM systems are better at load following, so are potentially more suited to off-grid systems that only operate the electrolyser when energy is being generated.

At LCEP in Fife, a 60kW alkaline and 60kW PEM electrolyser have been installed, powered by electricity from a 750kW Norwin wind turbine at the site. These will supply a fleet of 15 vans and two council refuse lorries converted to run on hydrogen. The fleet is due to come into operation by mid-2016 and will be used to assess the financial viability of such technology.

Mr Todd acknowledges the economics are still an issue, but expects capital costs to fall as technology develops further. A 100kW electrolyser system, including compressor and storage tanks, typically costs around £250,000 to install, with the current market value for hydrogen at around £6-7/kg, he says.

“It is a substantial investment, so a guaranteed purchase agreement for the hydrogen needs to be in place.”

The Scottish Agricultural College is due to publish findings from its analysis into the economics of hydrogen production on farms in December.

Mr Todd says there are some health and safety requirements specific to hydrogen generation and storage, but most regulations are similar to any pressurised gas, which many farmers are used to dealing with, he says.

“The level of risk is no greater than any other type of fuel storage and the maintenance/ operation of electrolyser systems, once installed professionally, should be well within the capability of farm staff.”

Other farm uses for hydrogen

Advances in fuel cell technology within car manufacturing and further cost reductions could open the door for hydrogen-powered tractors and other farm equipment in the future.

New Holland has been developing its NH2 hydrogen-powered tractor for several years and despite first showing the prototype in 2009, commercial roll-out has been dogged by the prohibitively high costs of fuel cells.

The 75kW (106hp) tractor, based on the existing T6000 model, features fuel cells that drive two electric motors, one for traction and the other for the PTO and auxiliaries.

Work is also under way to explore the feasibility of using hydrogen to produce urea fertiliser by combining it with atmospheric nitrogen and carbon dioxide.

The Shapinsay Development Trust in Orkney was recently awarded a £25,000 Scottish government grant to investigate a system that uses hydrogen produced from a PEM electrolyser powered by Shapinsay’s community wind turbine.

LCEP is looking for potential farm sites on the east coast of Scotland to install demonstration hydrogen generation equipment. Anyone interested should contact iaintoddconsulting@gmail.com