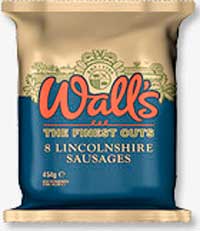 Pig farmers are up in arms after it emerged that Lincolnshire sausages are being made using imported pork.

Lincolnshire sausages, sold by Wall’s, one of Britain’s most famous food brands, are actually made with frozen pork from Germany.

The company has admitted sourcing at least half its meat from intensive pig farms on the Continent, according to a Sunday Telegraph investigation.

The Wall’s website boasts that its sausages have been “savoured” by British households for more than 200 years.

The company is owned by Ireland’s Kerry Group.

Although its sausages are labelled as Lincolnshire or Cumberland, a Kerry Group spokesman said it described the recipe rather than country of origin.

The label had no bearing on the origin of the meat, which was sourced in Denmark, Holland and Germany as well as the UK.

The Country Land and Business Association said the revelation vindicated the organisation’s campaign for local food.

The practice was completely legal but highlighted a loophole in labelling laws.

Manufacturers could claim products were “British made” – even when the main ingredient was imported – provided it was processed in this country.

Lincolnshire pig farmer Meryl Ward said: “Customers deserve honest labelling so that they can make genuine choices on the provenance of the food that they eat.”

Retailers were able to source meat from whichever country provided them with the biggest margin and then disguised the product with local packaging.

Mrs Ward, who runs Uncle Henry’s Farm Shop and Café in Gainsborough, said she always used local pork from her own pig farms.

“The only way that customers can be sure is by shopping locally and asking for the names of the farmers who produced the meat.”