Not, I hasten to add, the two attached to his body – the Danes, after all, are noted for their reserve – but the four holding up his desk. There’s nothing particularly special about them, it’s just they’re sitting on little blocks of wood in a rather DIY sort of way. 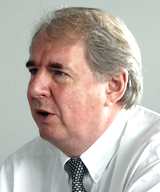 Apparently Mr Lauritzen is a good deal taller than his predecessor, Tim Smith, and the desk just wasn’t comfortable.

As chief executive of a company with a £1.15bn turnover it might have been expected that a quick snap of the fingers would immediately procure a more appropriate place to work, but he seems happy to wait.

That attitude probably sums him up well, there doesn’t seem to be too much of the ego that’s often part of the chief executive package on display in his corner office, which has panoramic views of the rolling countryside around Arla’s Leeds headquarters.

Few tears shed
A discrete stainless steel Rolex watch is one of the few outward signs of success.

Historically, the Danes haven’t always been welcomed with open arms when arriving in the UK, but few farmers supplying Arla Foods UK shed any tears when Mr Lauritzen was bought in this April to replace Mr Smith as the milk processor’s chief executive.

Rightly or wrongly, many reckoned this time around it was Mr Smith who had been doing the modern-day pillaging by cutting the price Arla was paying suppliers for their milk.

Mr Lauritzen’s arrival was prompted by the decision by Scandinavian dairy co-op Arla Foods amba to buy the shares in Arla Foods UK it did not already own in a deal worth over £210m. 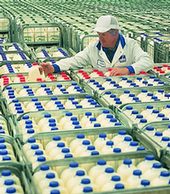 Although Arla Foods amba, which belongs to 9400 Danish and Swedish farmers, already owned 51% of the shares in Arla Foods UK, the structure of the business meant it had relatively little say in how the firm was run.

Swift changes at the top

But with total control, changes at the top were swift and Mr Smith and his finance director Nigel Peet were quickly shown the door with handsome payoffs

There was widespread speculation that three profits warnings to the City and a souring relationship with its farmers didn’t help their cause, but Mr Lauritzen is far too diplomatic to comment.

In fact, he says he has taken over a very well run company that could even show Arla’s Scandinavian operations a thing or two.  He’s particularly impressed in dealings with retailers. “You have the best retailers here so you’ve had to learn how to approach that.”

So why then was it felt necessary to invest so much money taking over the company? “We couldn’t get synergies with the rest of the group, now we’re in a position to integrate everything,” he says.

And the hasty removal – rumour has it they were walked to the door – of  Mr Smith and Mr Peet? “That wasn’t so unusual. They were related to the PLC situation. It’s a new situation with a de-listed company. The best way to obtain as many synergies as possible was to change the management.”

Mr Lauritzen, who says he wants to talk about the future and not dwell on the past, is keen to talk about synergies, but apparently there is no master plan in place yet as to how they will be delivered.

However, Arla won’t be using its new acquisition as a Trojan horse to simply ramp up the volume of its Scandinavian brands, like Lurpak, that are exported to the UK, reassures Mr Lauritzen.

He says the company is prepared to invest further in the business and there will be a focus on new product development utilising knowledge from Scandinavia and around the world.

However, he’s keen to stress that farmers shouldn’t see imported products as a threat. “It’s a positive thing, strong brands open doors to customers and without them we couldn’t invest. It would be narrow-minded just to focus on production from the UK.”

But given the right product there’s no reason why the flow shouldn’t be two-way with Danish or Swedish consumers tucking into more UK dairy produce, reckons Mr Lauritzen. “There’s a lot of innovation here.”

He’s very keen to emphasise how important Arla sees the UK’s contribution – about 30% of turnover – to its overall business. In a moment of rare, and admittedly slight, immodesty he says his appointment is a sign of the firm’s commitment.

However, there’s no reason for modesty. Arla has often relied upon Mr Lauritzen, who sits on the co-op’s executive management group and for the past 13 years has headed up its ingredients business, to sort out problems or develop markets in notoriously difficult countries to do business like Saudi Arabia, China and Iran. “I could tell you some stories,” he chuckles.

In fact, the 58-year-old could almost be viewed as a trouble shooter. Will he be here for just a few years to sort out the Brits? The answer is an emphatic no. “I could well finish my career here.”

So how does Mr Lauritzen plan to win over farmers, many of whom have felt let down by management? A series of price increases, which has boosted the firm’s standard-litre price by 2.2p/litre since April, was a good way to start, but it’s easy to appear generous in a rising market.

There will be no further rise this month, he says, but more should be on their way by the end of the year and, hopefully, could be substantial. “I don’t think it makes sense to have a lot of small increases.”

Less reassuringly, he refuses to say if Arla will stand by the payment model, introduced this spring, which links milk cheques to the 12-month rolling return (AMPE) that the firm gets from liquid milk by-products like skimmed milk powder.

These are increasing rapidly in price and, if the gains are maintained, Arla could be looking at a milk price heading well over 25p/litre by Christmas.

“But it’s fair to say milk prices will be set in co-operation with all parties and we want to pay the best price possible on a reliable basis,” he offers in recompense.

“Farmers have to invest a  lot in their businesses and need to be able to plan.”

Another pressing issue Mr Lauritzen has already shown a willingness to tackle is getting UK farmers involved with the business.

He has invited the Arla Foods Milk Partnership, which supplies almost 90% of the firm’s 2bn-plus litres of milk, to propose ways in which it would like to take a stake in Arla Foods UK.

He claims to have no idea about how this could happen but is hopeful a deal can be agreed by the end of the year if not earlier.

Longer term, he says this could be the first phase towards AFMP’s members achieving their aim of joining Danish and Swedish milk producers as full Arla amba co-op members, but he offers no guarantee such a move will definitely happen.

Getting to know each other

The British and Scandinavians probably need some more time to get to know each other first, he says.

Off duty, Mr Lauritzen says he enjoys a good pint of bitter – he doesn’t even like lager – a taste acquired when he started his career as a young man in a small Arla trading office in Cheshire. “You have fantastic bitters.”

First impressions are you wouldn’t mind joining him for a few down the pub and maybe get to hear some of those stories from his time abroad.

But dairy farmers will want to see further significant price increases and the offer of a meaningful stake in the business before they are able to completely put their trust in this latest Danish invader – even if he does show them his legs.