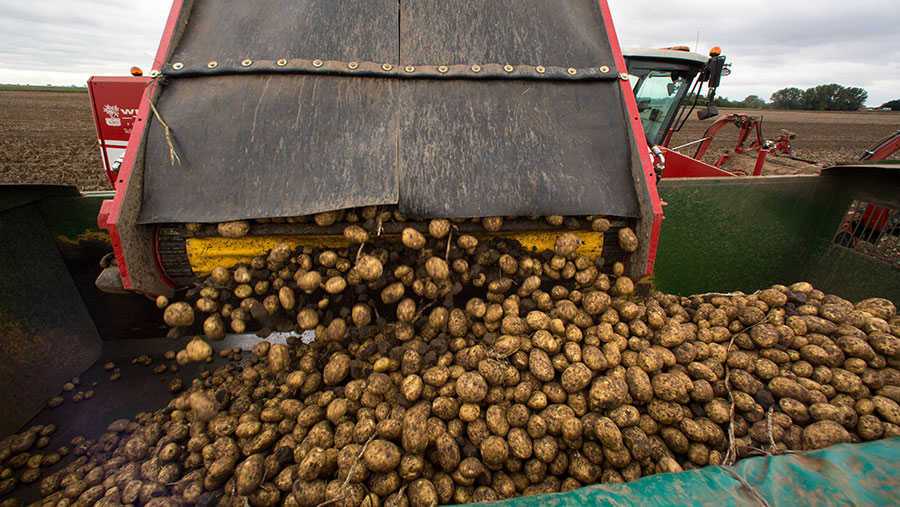 Farmgate prices for potatoes will be lower than average in many markets as production levels are set to rise for the 2017-18 season, according to an AHDB report.

The levy board’s GM Market Intelligence report [PDF] suggested that yield increases combined with a 4% increase in area planted to 121,000ha, point to a higher output than was seen a year ago.

The increased area planted is due to the relatively good prices seen in 2016 of almost £194/t which encouraged growers to switch fields to potato production.

Good conditions in the spring of 2017 got this year’s season off to the best start in six years, with the first 100,000ha planted in the fastest time period since 2011.

Although growing and harvesting conditions varied, production is looking to be higher than average.

“If average yields are achieved this year, production could be between 5.6 and 5.7m tonnes,” the report said.

See also: What would move grain prices from their narrow range?

“This would mean a crop at least 400,000t larger than the two previous seasons,” the report added.

The increased production is likely to put pressure on market prices and AHDB Potatoes strategy director Rob Clayton said the effect could already be seen.

“We have seen the weekly average price survey free-buy price drop by almost £50/t since the start of the season.

“A key driver for this has been a high level of potatoes entering a market place largely dominated by contract supply, currently leaving very little demand for free-buy potatoes,” Mr Clayton said.

European growers have also increased output with the area planted by the North-Western European Potato Growers group – Great Britain, Belgium, France, Germany and the Netherlands – up by almost 6%.

Higher yields mean production across the group is forecast to be up by an average of more than 17% on 2016 with the biggest increases of 20% recorded by the Netherlands and Belgium.