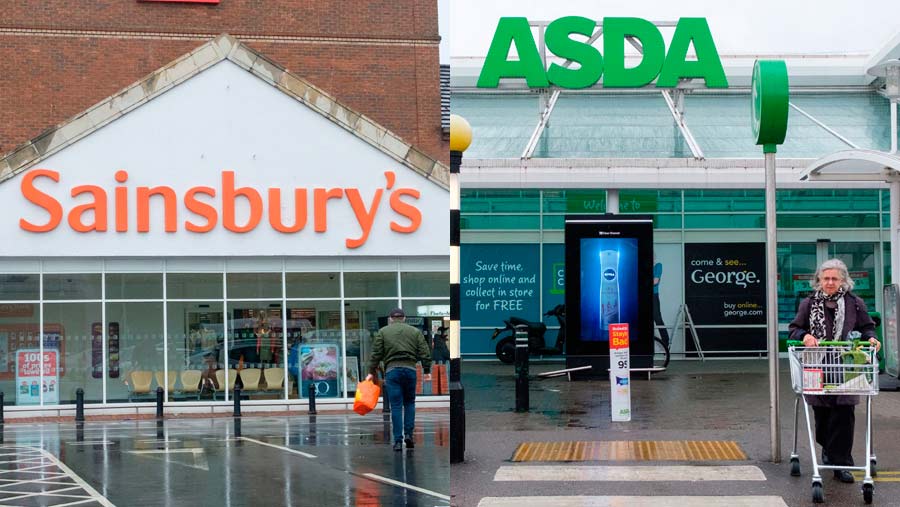 The mega-merger between supermarket giants Asda and Sainsbury’s looks set to squeeze the supply chain’s margins even tighter, following a commitment from the new entity to deliver food that is 10% cheaper for consumers.

Farming unions and industry representatives have expressed concerns over what the deal will mean for producers and suppliers. The merger will create the biggest UK supermarket group in history, with about a 26% share of the groceries market.

National Sheep Association (NSA) chief executive Phil Stocker reacted angrily to the announcement, saying that the rhetoric of more product for less money meant the price squeeze on suppliers would only get tighter.

“This loss of competition in the marketplace and an increased imbalance in the supply chain cannot be in the long-term interests of food producers – nor, in my mind, of society at large,” said Mr Stocker.

The deal would diminish the public’s appreciation of the value of food, according to Mr Stocker. He also warned that continued pressure on the supply chain would have irreversible consequences down the line.

“If we end up putting pressure on the bulk of our sheep farming families and businesses, we will end up with a very different countryside and rural community – and the danger is that it won’t be noticed until it is lost,” he added.

Prices for suppliers would probably get even lower, according to James Brown of pricing specialists Simon-Kucher, who advises a number of supermarket suppliers.

“Sainsbury’s and Asda have huge buying power, which already provides them with rock-bottom supplier prices.

“Where do grocery manufacturers and farmers go from there, when the merger gives them a larger combined market share?” he said.

“The prospect of this merger will send a huge chill up and down the whole supermarket supply chain, while their current suppliers will be braced for demands for further price cuts that many will not be able to deliver.”

Mr Brown added that any preliminary savings for consumers would evaporate in the medium to long term as consumption would not be affected by the merger, providing no real volume benefits for suppliers.

The deal will now be subject to a potentially lengthy investigation by the UK government’s Competition and Markets Authority (CMA). However, Green MEP Molly Scott Cato is calling for the EU’s Competition Commissioner to block the takeover altogether.

“I hope the EU Competition Commission will check out this proposed merger and force Sainsbury’s and Asda to shelve their plans.”

With Tesco already holding a 30% stake in the marketplace, “It cannot be right for just two retailers to hold almost 60% of the market,” she said.

Ms Cato added that the larger and more powerful retailers become, the more ruthless they are in seeking to eliminate competition and pressurise producers, leaving them struggling to remain viable.

Worse deal for farmers and consumers

This sentiment was echoed by farm advocacy group Sustain, which urged the CMA to throw out the proposed merger.

“The Asda-Sainsbury’s merger will create more grief for farmers trying to get a fair deal from an ever-shrinking set of buyers – lower prices and few market options is the last thing they need with the uncertainties of Brexit ahead,” said a spokesperson.

“In the long run, it will mean reduced choice for consumers with farmers squeezed and fewer outlets as the mega corporation combines its stores and high streets go into further decline.”

However, the merger presented an opportunity for the new entity to adopt a system of responsible sourcing and to end the unfair trading practices that currently blight the sector, said NFU Scotland chief executive Scott Walker.

Mr Walker added that farmers would want to see the strongest commitment from the new retailer to sourcing more UK-produced food than the existing companies do at present – a sentiment back by NFU president Minette Batters.

Deal good for everyone, says Sainsbury’s

However, Sainsbury’s boss Mike Coupe insisted the deal would be good for all parties involved, while also delivering cheaper food for consumers – up to 10% on everyday household grocery items.

Mr Coupe, who will take the top job at the combined enterprise, said the new entity would take a joint approach to buying, harmonising the lowest prices the two retailers currently pay their suppliers.

This would free up £350m of savings in the two years following the deal’s completion which should happen in the second half of 2019.

Small and large suppliers would see benefits in three areas, according to Mr Coupe: the opportunity to grow their business, to become more efficient and to produce more differentiated product ranges.

“The growth of Lidl, Aldi and Amazon has narrowed opportunities for suppliers, so this will be a force for good,” said Mr Coupe.

“The best supply chains are those where both parties win. This will be a great deal for everyone.”