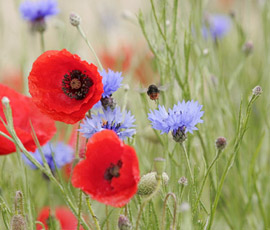 Increasing farm output must not be achieved at the expense of the environment, the RSPB has warned.

“If the UK is to meet the needs of both agricultural production and conservation, society will need to consider how to optimise the use of its land,” said RSPB conservation director Martin Harper in a paper delivered to the Oxford Farming Conference.

“Now is an extremely challenging time for agriculture,” delegates were told. “Many current food production systems are unsustainable and the environment degradation they are causing is in itself a critical threat to food security.”

Mr Harper added: “Food systems must be made more sustainable, while simultaneously meeting the challenges of a growing population and climate change. Declines in farmland wildlife are one issue that must urgently be addressed.”

Protected wildlife areas were a vital conservation tool within the UK where a mixture of approaches would result in the most efficient use of land. “If it is deemed necessary in future to increase agricultural production, this must not be achieved by expanding farming into wildlife areas.”

Mr Harper acknowledged the case for increasing the productivity of existing farmland – an argument known as the land sparing model. But there were sectors and areas where intensification would not be sustainable, he warned.

“In the UK, extensive livestock systems based on semi-natural grazing and low intensity grassland are associated with high levels of biodiversity, as well as providing other valuable services such as carbon sequestration in soils.”

Intensive livestock production, where livestock may be housed for a significant proportion of time, did not provide these benefits. In fact, the negative environmental impacts of intensive systems might be significant, in particular through growing crops for animal feed.

“This is a clear case for adopting the land sharing model, where extensively grazed land provides food alongside other benefits, rather than attempting to pursue intensification,” said Mr Harper, highlighting the example of the RSPB’s own farm in Cambridgeshire.

“Like all farmers, the RSPB is constantly faced with decisions on how to balance the delivery of environmental public goods and yield – what is best for the farm’s profit margin or production may not be best for the wider environment or food production in the long term.

“The RSPB believes that agri-vironment schemes, developed on the basis of sound scientific evidence, must continue to play a vital role in helping land managers balance these objectives.”

Have your say on our fourm about the Oxford Conference debate