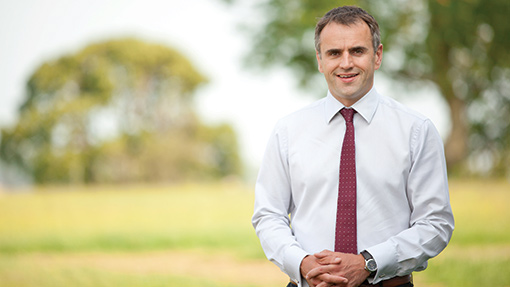 As Britain’s fourth biggest supermarket, with 11% of the groceries market share, Morrisons is a big customer of British farming. Andrew Loftus, the retailer’s agricultural manager, explains the ethos  of the business to Suzie Horne and shares his vision  for the future.

What’s different about Morrisons  in its dealings with farmers?

There are two big differences: the sheer scale of our commitment to British produce, and our vertical integration. We have 16 manufacturing sites in the UK, including three abattoirs, seven produce packhouses and a major bakery, all buying direct from British farmers.

Our commitment to 100% British fresh beef, pork, lamb and chicken under the Morrisons label remains the biggest of any major retailer to British farming, and is six years old.

All of our fresh milk, eggs, cream and more than 80% of our cheese by volume are also UK-sourced.

How many farmers does Morrisons have a direct relationship with?

How do those relationships work?

It varies according to the sector. Take livestock as an example: we have a team of dedicated buyers based out of our abattoirs in Lancashire, Aberdeenshire and Lincolnshire.

They tend to specialise in one or two species, and look after our relationship with individual farmers. They’ve built up a strong reputation for quality and fairness, earning farmers’ loyalty in return, such as Michael Winchester who has been with us for 34 years.

We pride ourselves on providing the most detailed and timely carcass information available in the industry, through our dedicated farming website.

However things don’t stand still – we’ve just launched a mobile app which takes all the paperwork out of the process by automatically generating food chain information and sending the movement off to the British Cattle Monitoring Service.

How involved are you in helping producers find efficiencies and produce for the market?

We’re committed to British produce, but we’re also a value-focused retailer. So we need to make sure our supply base is competitive, not just in the UK but globally.

Historically UK supermarkets, processors and farmers have been reasonably good at working efficiently within the confines of their own business, but they’ve not been the best at working together, and working with scientists and academics.

To do that, a history of mistrust and a short-term trading mentality needs to be overcome. We are on that journey. It is often hard, but having invested more than £21m in a new pig abattoir this year alone (just one example) Morrisons commitment cannot be questioned.

How would you characterise farmers you like to do business with?

They are progressive, professional, focused on the product, know their true cost of production and are interested in the long term.

How do you expect the relationship with suppliers to change in the future?

They will be more integrated. Much more information will pass between us, particularly about quality, yield, supply and demand, but this will be seamless as new IT structures take the place of paperwork.

Possibly, price will be less of an issue as we are all linked more and more to transparent global markets. This will bring new challenges –managing volatility will be key.

What can farmers do to improve their position as a Morrisons supplier?

It’s hard to answer that for all sectors in few words. But understand the market better, look beyond the point of sale to how the product is processed and how the end user actually uses the food you produce.

We introduced the Hemsley brand at a time when consumer budgets were under incredible pressure. Offering a cheaper alternative was the right thing to do, but in hindsight the branding could have been clearer.

There is still a place for imported New Zealand lamb when it offers better value and complementary seasons and we clearly label it as originating in New Zealand so our customers have a simple choice.

As we stand today 100% of our fresh beef, pork, lamb and chicken is British.

Is there any other farm produce that you would like to source as 100% British?

We lead the industry on this. I think that’s probably a question for other supermarkets.

What do you see as the big challenges facing Morrisons and also the farming industry?

Global competition and price volatility for both.