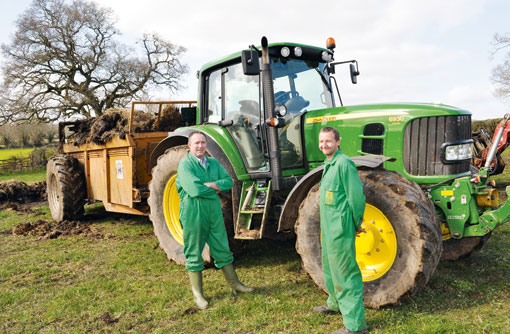 When it comes to managing staff, Clinton Devon Estates must be doing something right. It has again achieved the top standard for Investors in People and The Sunday Times recently ranked it as the 24th best small company to work for in the UK. It also ranks second for its efforts to protect the environment, and 8th for its contribution to society.

The focus on nurturing staff may sound like the preserve of HR departments in big business but for farms manager George Perrott, it has sound business benefits.

Mr Perrott manages a team of 10 farm staff, which includes two dairymen, a shepherd, five general farm workers and an office secretary. Between them they have clocked up the best part of 70 years worth of experience on the farm, with the longest serving member having done 25 years and another at 20 years.

“We don’t have a particularly high staff turnover and I think that’s a reflection of what we do,” says Mr Perrott. “The highest staff turnover tends to be for the relief milker/ general farm worker jobs, which reflects the nature of that type of role.”

Relief milkers have recently been sourced through the reliefmilkers.co.uk website and Mr Perrott has found this more effective than advertising in the farming press. “Because we offer accommodation with the role, ads tend to attract a lot of people from a long way away, not necessarily the right people for the job.”

Getting a good reference from a trusted source is key to recruiting decent staff, yet can be one of the most difficult things to do, he says.

While most staff are on permanent contracts, both herdsman are sub-contracted through agricultural recruitment specialists LKL Services. This allows Mr Perrott to draw on LKL’s specific database of skilled workers and gives greater flexibility in the recruitment process than having people employed directly on full-time contracts.

“Historically it has been quite difficult to get good herdsmen due to the nature of the job and the long, unsociable hours, but we’re very happy with the guys we have now.”

Using a third party comes at a price as LKL takes a commission from what it pays workers, but the firm pays for job advertising and also deals with the tenancy agreements on the tied houses.

In the event of a member of staff leaving, the tenancy is with LKL and not the individual. It also means that if there is ever an issue with a member of the contracted staff, both Mr Perrott and an LKL representative will be involved in resolving it.

Mr Perrott acknowledges the Investors in People scheme is not designed for farms, but says there are a number of aspects in it that work well and could be applied to most farming businesses.

The first of these is the annual appraisal for each member of staff, carried out in October. “It’s generally the best time of year as we’ve normally finished drilling and aren’t flat out calving, combining or silage making,” says Mr Perrott.

“It does take a good hour or so to sit down with someone and for both sides to air their views, but every time it is constructive, even if the outcome might not be the one you want.

“It does take a good hour or so to sit down with someone and for both sides to air their views, but every time it is constructive, even if the outcome might not be the one you want.”
George Perrott

“Invariably when you have a one-to-one, things come out that you never have time for in a normal day. But it’s vital to have an allotted time and stick to it, as there’s always an excuse as to why it can’t happen with everything else going on. It’s something that I haven’t been good enough at doing in the past, but have made an effort to set aside time for over the past couple of years.”

Once appraisals are completed, they go to the estate director who also adds his own comments.

Alongside the appraisals, an annual personal development plan is also completed, which aims to highlight things that will help people do the job better. This year all staff went on a first aid refresher following the PDP and others have recently attended animal transport courses, John Deere tractor operators’ courses and chainsaw refreshers.

“These things aren’t just happening because we’re Investors in People. If we have managed to attract a good young person who wants to go places, we’ve got to put the effort in to developing them. It also gives them a written record of performance that can be used on a CV.”

Apart from the regular breakfast meetings (see panel), a separate six-monthly meeting is also held with the vet, herdsmen and stockman to go over any issues specific to the dairy herd and plan appropriate action.

“Across all of these various meetings, while it’s good to talk about problems, it’s also important to give credit where things have gone well,” says Mr Perrott. “Part of my job as a farm manger is to recognise people’s own strengths and get the best out of them. That means helping them when things aren’t going well and recognising them when it’s deserved.”

As part of this, he says it’s vital to lead by example. “I don’t expect anyone to do anything I wouldn’t do, I just expect them to do it better than me. Because of this, the guys appreciate that I know when they’ve done a good job.”

Printing the farm’s name on the main tractors and forage harvester also helps build a sense of pride among workers, he adds.

Day-to-day management comes down to a brief meeting between most of the staff first thing in the morning and Mr Perrott is confident in staff being able to make decisions in his absence.

Pay is based on the AWB’s craftsman rate, although salaries increase in line with the percentage rise applied across Clinton Devon Estate. Mr Perrott is keen to see staff take their full holiday entitlement – everyone gets two days off a fortnight. “It’s much better to put in one hundred percent 80% of the time than 80% all of the time,” he says.