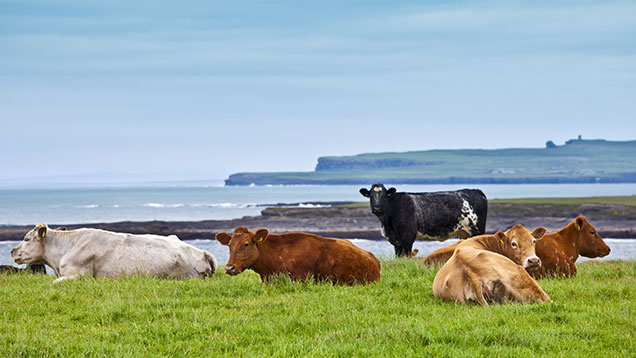 Pressure on beef prices from Irish imports could soon ease off, according to new figures.

This means the volume of finished cattle should tighten quickly and could be 120,000-150,000 head down on 2014 over the next year, according to the Irish Farmers Association.

Good supplies from Ireland have been partly to blame for the heavy slide in British beef prices in 2015 – along with a strong pound and plenty of numbers around in the UK.

But Stuart Ashworth, head of economics at Quality Meat Scotland (QMS), said the supply-demand pendulum could soon swing back to farmers.

“We know the availability of prime cattle in Scotland, UK and Ireland will diminish so, in the next quarter, we expect to see the volume of cattle arriving at abattoirs slow down,” he said.

“It is likely we will then see some firmness in the market for the beef producer.”

Prices are now more than 30p/kg lower than in mid-January.

The way sterling has strengthened 10-15% has had several knock-ons to the beef trade.

QMS estimated that this, combined with decent domestic supplies, saw the UK coping with 8% more beef than a year earlier.

Mr Ashworth said a complex set of factors were affecting prime cattle prices that were outside producers’ control.