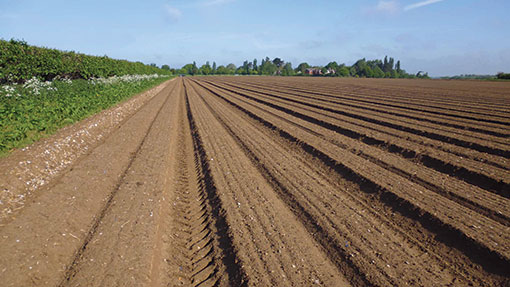 Several large blocks of arable land in eastern England, all with irrigation, offer buyers a choice they have been lacking for a good while.

Clarke & Simpson has a total of 445 acres in Suffolk for sale on behalf of national garden centre business Notcutts, with an overall guide price of £4.35m.

Within this is 325 acres at Church Farm and Rookery Farm, Hacheston, near Woodbridge. Lotted three ways, it has an overall guide price of £3.2m for the Grades 2 and 3 land. One lot includes grain storage for about 600t, while the whole has a summer abstraction licence for 30m gallons supplied through well points and a new pumping station.

Also in Suffolk, Savills has about 300 acres of bare arable land with a guide price in the region of £3m.

Lime Tree Farm to the south-east of Blaxhall has good field sizes and is mainly Grade 2 on Burlington soils. The farm has a water abstraction licence for almost 20m gallons pumped from shallow boreholes into a reservoir built in 2012. Irrigation is available to all areas via an underground ringmain.

In the Cambridgeshire Fens, Brown & Co will launch a Grade 2 commercial arable farm at the end of May. Bank Farm at Thorney near Peterborough has 444 acres of Grade 2 land with two yards including an extensive range of agricultural buildings. There is also a reservoir and centre-pivot irrigation system.

“We are marketing it as a whole and anticipate very strong interest – the opportunity to purchase a significant acreage of Grade 2 commercial farmland does not arise very often,” said the firm’s Charlie Bryant. Bank Farm has a guide price of £4.75m (Brown & Co 01775 717 893)

It has more than 526 acres on mainly Downholland/Chatteris series soils and includes land at Eastville and Friskney in five lots, with a guide price in excess of £10,000/acre.

Slated House Farm offers a range of general purpose buildings, a 700t grain store and a detached house. The land is suitable for potatoes and sugar beet as well as combinable crops and has an abstraction licence. (Brown & Co 01775 717 892)