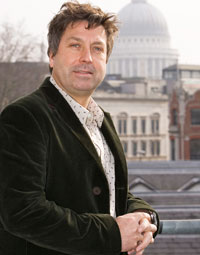 Celebrity chef John Torode has resigned as president of the Royal Agricultural Society of England (RASE).

The Australian chef, better known as the co-host of the BBC series Masterchef, stepped down after only four months in the job.

“It was after a great deal of consideration and with regret that I have resigned as president of the RASE,” he said.

“Balancing my personal and work schedules with the commitment necessary to offer my best to the society is, unfortunately, unachievable.

“I will continue to help finalise details and contacts linked with the Royal Show and projects and wish them the very best for the remainder of the year and beyond.”

The resignation is a disappointment for RASE, which had high hopes after making Mr Torode its president last October.

Established in 1840, the 6000-strong charity aims to showcase the best of British agriculture through its shows, events, conferences and awards.

It had seen Mr Torode’s appointment as a golden opportunity to raise the profile of agriculture with a wider audience.

RASE chairman Hugh Oliver-Bellasis said: “We are sad that John Torode has had to relinquish his presidency of the RASE.

“John had hoped to achieve a fine balance between his TV commitments, his business and the other demands of his professional and personal life in order to make a significant and worthwhile contribution during his year.

“Unfortunately, in this turbulent economic climate, his workload and extraneous commitments do not now leave him sufficient leeway to offer his best to the society.

“We completely understand this dilemma and very much appreciate all of the work he has done with RASE so far.”

Adel MacNicol, widow of former RASE chairman Ian MacNicol, has agreed to take over as RASE president for the remainder of the presidential year to October 2009 .