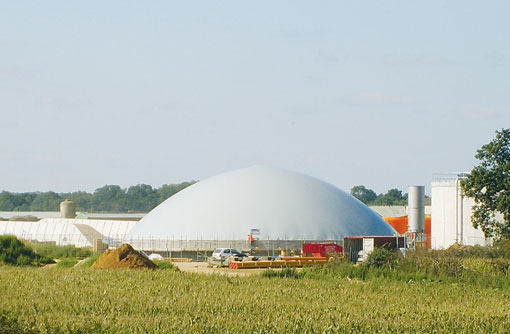 Construction on the 1.4MW Symonds Farm Power AD plant began in March 2011 and a year later it was working at full capacity.

Supported by DEFRA with a farm diversification grant, the plant was built and commissioned on time and in budget.

Producing enough electricity for 3,000 homes, the plant at Risby near Bury St Edmunds is designed to process 26,000t of purpose-grown maize as well as feedstocks connected to the pig unit, such as muck and any excess pig feed.

The joint venture partners are GEO Gittus and Sons of Symonds Farm and Northamptonshire-based recycling and renewables company Material Change. Both put money into the £4.8m project, whose costs included some site clearance and other site specific costs. Funding was 30% equity, 15% grant and 55% borrowing.

“Banks appear prepared to look at AD funding when performance is proven but are currently not prepared to look at project finance in advance of operations,” says Ed Bastow, managing director of Material Change, which is keen to develop more mixed-grown crop and waste AD plants generally.

Physical construction of the plant was largely completed in August 2011 with wet testing commencing in October and commissioning beginning in November 2011. The whole project from inception through planning to full operation took between three and four years.

“The plant has been built with Agraferm Technology, as we considered this allowed us to make the best use of the space available while maximising the energy yield from the feedstocks,” says Mr Bastow.

“The small physical size of the plant also allows us to keep operating costs and onsite energy use low.

“We have a long-term contract agreed with Symonds Farm to supply maize and farm waste as feedstock for the plant and a corresponding agreement for us to supply the nutrient rich digestate for application back to their land.”

During the development, private sales of electricity were negotiated with a nearby briquetting plant so that in January this year when the electrical switchgear and grid connection was installed, up to 20% low voltage supplies could be sold to local users and for high voltage outlets.

“We are also in discussions to confirm additional private wire electricity and heat sales.”

Anaerobic digestion can help to reduce emissions and well as cutting fertiliser and energy costs while generating income and helping to support sustainable intensification.

The joint venture meant finding less outlay than if the farm had pursued the AD project alone. There was also a benefit in the joint venture partner being an experienced renewables operator.

Bringing maize into the rotation offered cultural and rotational benefits in blackgrass control compared with a wheat/rape, wheat/rape rotation. This is in addition to the fertiliser and soil conditioning value of the digestate, says Mr Gittus, who expects payback on his investment in seven years.

Payback could be earlier depending on the value attributed to the solid and liquid digestate fertiliser but there were many ways of calculating this. “I don’t think you ever find two plants alike.

“It’s a valuable resource that we will make maximum use of and we are already getting the value of it now,” says Mr Gittus.