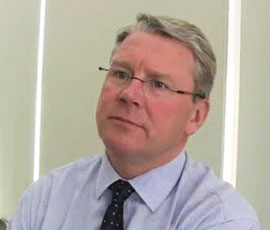 Farm leader Peter Kendall is to stand down after eight years as NFU president.

Mr Kendall announced his retirement to NFU council members during a union meeting at Stoneleigh Park on Monday (14 October).

He will stand down following the NFU’s annual conference in Birmingham next February, when a new president will be elected.

NFU deputy president Meurig Raymond is seen as the front-runner to be Mr Kendall’s successor – although he has yet to confirm he will stand for the leadership role.

Mr Kendall has served four consecutive two-year terms as president during which he has made a name for himself as one of the NFU’s most successful leaders.

The Bedfordshire farmer has reinvigorated the union since he ousted Tim Bennett as farm leader after just two years in 2006.

Mr Kendall was the first man to openly challenge a sitting president and win.

In his early 40s at the time, Mr Kendall’s election marked a turning point for the union – which included a younger outlook and a more media-savvy image.

His time in office has encompassed a series of challenging harvests and extreme weather, a foot-and-mouth outbreak, CAP reform and the menace of bovine tuberculosis.

But Mr Kendall will be remembered for persuading two successive governments and all three main political parties that farming is a dynamic industry which deserves to be taken seriously.

Notable successes include helping to stave off a mandatory set-aside replacement that would have forced farmers to take land out of production at a time of rising demand for food.

Instead, Mr Kendall helped persuade an initially sceptical Labour government that farmers could be trusted to implement voluntary environmental measures on their land.

In the face of widespread opposition and legal challenges, he also encouraged the coalition government to introduce a badger cull to combat bovine tuberculosis in cattle.

Mr Kendall oversaw the introduction of a “Why Farming Matters” campaign, aimed at highlighting the importance of agriculture to the non-farming public.

More recently, the NFU launched a “Farming Delivers” campaign, showcasing how agriculture can help enhance the environment and mitigate climate change – as well as producing food.

But there is some unfinished business.

Mr Kendall has chosen to stand down at a time when many farmers fear they could be unfairly penalised by the way the government implements CAP reform.

He will also be standing down before the government’s controversial badger cull has been rolled out beyond two hot spot pilot areas of south-west England.

Although the NFU and the farming industry are in a better place than when Mr Kendall took office, agriculture will continue to need a strong leader to meet the challenges it faces.

More on this this topic