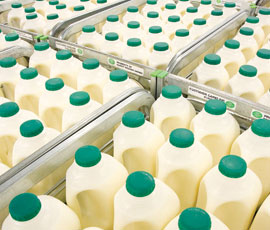 Concentrate on getting costs of production right – they are the most significant factor in dairy farm profitability and the two are far more strongly linked than many farmers appreciate, says DairyCo.

Milk can be produced efficiently at almost any scale and at any level of output but the key determinant of profit is total costs of production, not milk price, says its first Milkbench+ report.

However the report also acknowledges just how difficult it can be to make a profit from milk. With farm gate milk prices largely outside the control of producers, the report highlights positive steps which many can take to manage production costs and significantly increase returns.

“The report raises many issues,” said DairyCo analyst Karolina Klaskova. “But there is a real opportunity for producers because once you have a good handle on your costs of production any extra increase in milk price will go straight onto your net margin.”

Milkbench+ analyses costings from 330 farms across Great Britain, identifying three main dairy system types and within those, several key areas which account for more than half of the financial gap between the top and poorest performers in different milk production systems.

“For any farmer, it’s about being clear what you need to achieve,” said AHDB economics manager Mark Topliff. “There are lots of areas you might want to improve but you couldn’t tackle them all at once. This will help producers target the main areas for improving production efficiency.”

Getting the right balance between input use and milk output (herd size and average yield) was essential. In particular, low yielding herds needed to maximise utilisation of grass through a simple system and small herds must contain fixed costs, says the report.

Average yield per cow is not the main driver of profit, says the report, which cautions that higher yields are not the answer if produced at the expense of feed efficiency – every extra litre needs to be profitable.

Milkbench+ identifies three key enterprise types and highlights the potential for each farm type to excel. Four key cost areas account for more than half the difference in financial performance between the most and the least profitable herds.

• This system is achieving highest net margin in p/litre of the three systems (28.1% of revenue), achieved through high gross output and low costs

• However, on average its cows are achieving lower milk yields compared with the other systems

• Top 10 farms in this system have lowest net margin, which accounts for only 21.2% of their revenue

• Revenue is low and labour, depreciation, property and finance costs are high in comparison to high-output cows system

High-output cows – generally housed with intensive use of major inputs

• Feed and forage variable costs vary by 2.8p/litre on top 10 and poorest 10 farms in this group

• Cost of production is biggest factor in profitability

• Scope for many to improve net margins

• Fitting the system to the farm, family and business circumstances is crucial

• Well-managed, small herds can produce milk, on a per litre basis, at similar levels of efficiency to herds at least three times larger

• Provided the system is right, outputs lower than 5,000 litres/cow/year can be profitable

• Achieving the improvements will be challenging for some

A full copy of the Milkbench+ report can be downloaded from the DairyCo website.