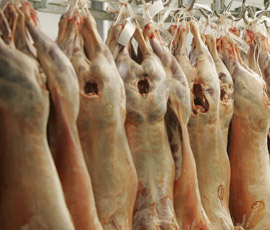 New-season lamb throughputs are up to a month behind the normal seasonal pattern.

Demand is being met by old-season lambs which, due to last year’s poor weather, have been slow to come through over previous weeks. Old-season lamb throughputs in the same week were 61,900 – almost double last year’s 31,400 head.

While last year’s lamb crop suffered peaks and troughs in prices and did not follow the seasonal pattern, this year’s new-season lambs seemed to be returning to the usual trend, said Paul Heyhoe, senior analyst at EBLEX.

“Early-lambing flocks were quite badly hit, with fewer born and producers taking longer to get them finished as quickly as they normally would,” he said.

Despite the new-season crop estimated to be three or four weeks behind, it looked as if the market had started to see its normal seasonal decline.

Hybu Cig Cymru said a number of factors were responsible for the slow new-season crop, including the poor weather, high cost of feed and the Schmallenberg virus.