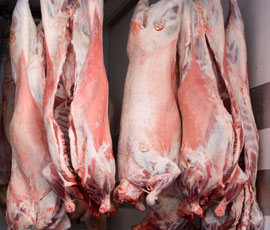 Deadweight lamb prices have slumped by 22.2p/kg over the past two weeks, to a new season R3L average of 409.2p/kg – 17p below the same time last year.

Liveweight prices dropped by 13.6p in the week to 3 July, before recovering by 2p this week, to a GB SQQ average of 186.8p/kg. In the first six months of the year, lamb throughputs at auction markets dropped by 2%, due to a steep fall in new season supplies.

In contrast, lamb consumption jumped by 9% in the 12 weeks to 10 June, due to strong sales of leg and shoulder joints over the Easter period, rising by 41% and 13%, respectively. However, continued price promotion was behind the sales rise, said Kantar WorldPanel. Household expenditure on lamb grew by 7%, to £157m, but 39% was sold on promotion compared to 26% during the same period last year.