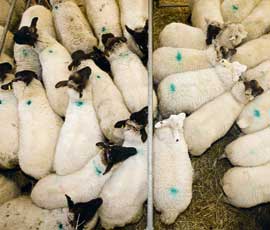 Lamb prices are falling rapidly, with Tuesday’s (29 May) markets down 23p/kg on the week to an average of 181.6p/kg for Standard Quality Quotation lambs in the 25.5kg to 45.5kg weight range. Numbers were up by about 35%.

While there is always a seasonal price slide, this year it has been accelerated by new season lambs finishing earlier than usual. Auctioneers also say that export trade is becoming more difficult because of economic conditions in many customer countries.

New season lamb throughput at Melton Mowbray market in Leicestershire on Tuesday was up by more than 80%, with 1,600 lambs averaging 178.95p/kg lw, down 17.84p/kg on the week.

While the euro pressure had been a factor for many months, it was now starting to get more attention, said Bryan Robinson, auctioneer and managing partner at Melton Mowbray.

“But we can’t blame the euro for everything – cull ewes are down by £10 a head too and they don’t get exported – they only go as far as Birmingham.”

While producers could do nothing about the state of the euro and its effect on prices, there was a 50p/kg premium for those who could put the correct finish on a 32kg lamb, said Mr Robinson.

He also suggested that with prices falling daily, producers should think very carefully about their plans for finishing lambs. “With creep costing in excess of £200/t, they have to question whether feeding expensive creep is the thing to do at the moment.” Finishing off grass would not only be cheaper, but could take the pressure off numbers.

Cumberland & Dumfriesshire Farmer’s Mart auctioneer Archie Hamilton, who sells at Longtown, said it looked like a very different season to last and warned producers not to let lambs get too heavy.

AHDB market analyst, Paul Heyhoe, said lambs were finishing about two to three weeks ahead of last year, hence the weight of numbers. “We’ve seen a big spike in throughputs.

“The seasonal drop was a bit earlier this year and heavier lambs didn’t help. Last year we saw seasonal drops of up to 20p week on week and Tuesday this week showed a 23p drop.”

With a difficult economic background at home too, lamb suffered from being the most expensive meat, although beef and pork were under pressure too, said Mr Heyhoe.

AHDB estimated weekly slaughtering throughputs for sheep through May show a rise of more than 10% to more than 729,000 head, compared with the same period last year.