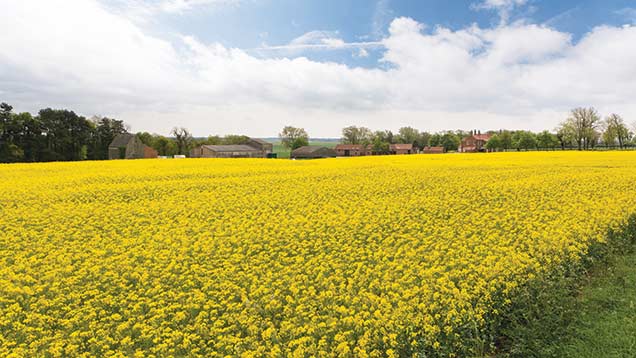 More than 2,000 acres of arable land is for sale in eastern England.

The largest is a top-end Lincolnshire farm with about 776 acres of highly productive Grade 2 and 3 arable land, fully equipped with 2,000t of grain storage, farm buildings, a five-bedroom farmhouse and three barn conversions.

Carr Dyke Farm is about nine miles south east of Lincoln and the majority of the land is in a single block cropped to wheat, barley and oilseed rape.

There is a range of concrete and portal-framed general-purpose storage barns and a continuous flow grain dryer.

Carr Dyke is for sale at a guide price of £10.5m with BPS entitlements included.

The farm buildings and about 432 acres of land at Hall Farm, between Watton and Hingham, has been grouped, with a second lot comprising a further 70 acres and a small area of permanent pasture.

The land is currently cropped to maize, sugar beet, barley and oilseed rape.

A farm with a track record of producing combinable crop yields in excess of 10t/acre from its Grade 2 land is for sale at a guide price of £4.525m as a whole, or in six lots.

Farley Green Farm, near Newmarket, has 370 acres and capacity for 600t of grain, as well as a four-bedroom house.

The farm includes about 12 acres of grass and four acres of woodland.

Two farms and a block of bare land are for sale in the Framlingham area through Clarke and Simpson. West Hill Farm has about 58 acres of Grade 3 arable land and permanent pasture with a range of farm buildings.

Most of the farm’s buildings are used for machinery or crop storage, and an eight-bedroom house is included in the sale at a guide price of £1.65m.

Woodlands Farm, has 220 acres of ring-fenced Grade 3 arable land which is currently put to winter wheat. Previous harvests have yielded about 4t/acre and an additional 62 acres of neighbouring arable land may also be available. The farm has about 27 acres of woodland and storage for 800t of grain at a guide price of £2.6m.

The gently undulating Grade 2 and 3 soils have been contract farmed and are put to oilseed rape, beans, wheat and barley but onions and potatoes have been produced on the lighter land.

About 119 acres of bare arable land is for sale in Bedfordshire at a guide price of £1.09m.

The Grade 2 land at Keysoe, near St Neots, is split into three enclosures and is all currently put to winter wheat.