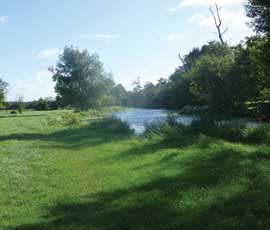 Land that features in a painting by Constable currently hanging in Tate Britain has come to the market in Suffolk.

The land at Hall Farm, Stratford St Mary, is located in the heart of Constable country at Dedham Vale in an Area of Outstanding Natural Beauty.

The area featured in several of the works by 19th century artist John Constable, and the painting Dedham Vale from 1802 is believed to feature this land.

The land at Hall Farm comprises 142 acres of pasture and water meadows and 89 acres of productive arable land.

It is on the edge of of the village of Stratford St Mary, comprising a single block with high amenity value along with arable land and river frontage on to the river Stour.

Situated between the major towns of Colchester and Ipswich, it has good access to the A12 trunk road.

The land is relatively level and divided by hedges and ditches, with boundaries defined by wooden fencing, hedges and the river.

The soil is designated Grades 2 and 3, deep well-drained fine loamy over clay course loamy, and fine loamy soils with some calcareous clay soils.

It has recently come out of a Natural England Environmentally Sensitive Areas management agreement, but is not in Entry or Higher Level Stewardship.

The cattle shed, the only building on the land, is open-fronted steel framed shed with cattle handling facilities, and provides storage for forage or shelter for livestock. The land is also in a nitrate vulnerable zone.

Shooting rights are retained by the seller for 10 years. However, mineral rights are included in the sale.

About 19 acres is sold subject to a Farm Business Tenancy, which expires in 2014.

The claimable area for single farm payments is 227 acres and entitlements are included in the sale.

The land is on the market for £1.75m for sale by private treaty and has already attracted a great deal of interest from locals, but agent Chris Leney from Robinson & Hall in Ipswich said it could attract a non-farming buyer.

“The Constable country link could attract other buyers – for example, Americans have a strong interest in Constable,” he said.

“It appears to be quite a modest piece of land but it’s quite exciting because of its historic significance,” he added. (Robinson & Hall 01473 835 253)