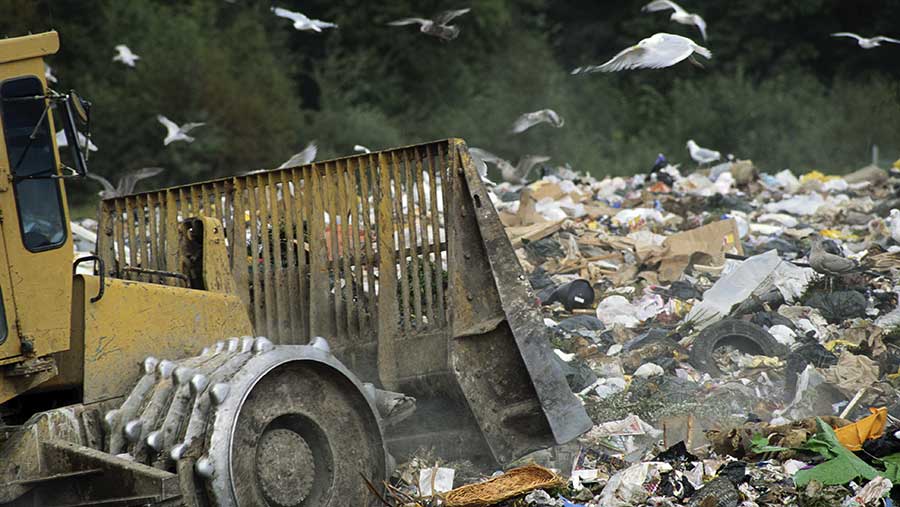 Farmers who rent out their land to anyone dealing with waste are being warned to make sure that they take all reasonable steps to ensure their tenant handles the waste correctly – or they could both be hit with a landfill tax.

HMRC has closed a loophole in the law which means that from 1 April 2018 all disposals at unauthorised waste sites fall within the scope of the landfill tax.

These are sites which should have an environmental permit or licence for disposal activities, but do not have one.

Previously, while operators of unlawful sites could be prosecuted and fined for handling waste illegally, they had avoided paying the same tax as legitimate waste handlers.

The aim of the change is to make the illegal disposal of waste less profitable and reinforce the principle that the polluter pays.

The new legislation means that anyone who makes a disposal, or is knowingly involved in a disposal at a site without an environmental disposal permit, may be jointly and severally liable for the tax.

The aim is to target people operating at the larger-scale, more organised end of the waste crime spectrum and reduce the environmental impact of illegal waste sites.

The tax could also apply to any material that is found in situ on an unauthorised site after 1 April 2018.

The legislation applies in England and Northern Ireland only, but the Scottish and Welsh governments have provisions in their own legislation to tax unauthorised sites.

HMRC says safeguards have been put in place to ensure that landowners who are unknowingly involved in waste being dumped on their land will not be liable.

So where a farmer has had material flytipped on their land without their knowledge, they will not be asked to pay the tax.

Similarly, where a person has rented out some of their land and has taken all reasonable steps to ensure the lessee is handling the waste appropriately, they will not be exposed to the new charge.

However, HMRC is urging landowners to be aware of their responsibilities by following Defra’s Waste Duty of Care Code of Practice.

For example, before renting land to an operator dealing with waste, landlords are being urged to check before signing a contract that the tenant will comply with the regulations.

As part of this they can check on the gov.uk website whether the potential tenant holds the correct permit to carry out waste operations.

If tenancies are already in place, landlords should consider re-checking what permits or exemptions their tenant holds, in order to ensure that the site is operating lawfully.

Simon Tilling, a partner with law firm Burges Salmon, said the government was very focused on tackling the problem of waste crime.

But he explained that while there was a lot of activity on farms that might fall foul of the strict waste management laws, the instances where HMRC would be seeking landfill tax from farmers would probably be more limited.

This was because the landfill tax would apply only if a landowner was proven to be making a permanent “disposal” of waste, for example, by digging it into the ground.

“If anyone is still running an old farm tip, unlawfully, then not only could they be hit for regulatory non-compliance, they might also be hit for landfill tax,” he said.

Farmers who were taking construction waste to build farm tracks should also make sure that they were on the right side of the law, he added.

While farmers could legally reuse aggregates on farm, they needed to have the appropriate waste exemption in place and ensure that they were compliant with the rules of that exemption.

“If you lawfully reuse waste aggregate in place of some virgin aggregate needed for farm improvement work you wouldn’t be subject to landfill tax as it wouldn’t be a permanent disposal, it would be a legitimate [waste] recovery activity,” he said.

“But if you fall the wrong side of that and effectively dispose of waste then as well as being non-compliant, you may also find HMRC say that it is an unlawful disposal of waste which is taxable.”