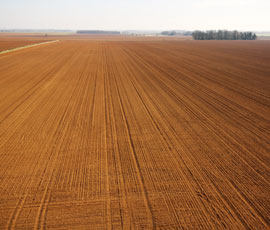 The launch of 1,500 acres of grades 2 and 3 arable land in Lincolnshire will be a good test of the market.

The land is on two farms under the ownership of the Agreserves company, the farming division of the Mormon Church in the UK which is selling to consolidate its agricultural interests further south.

High Dyke Farm at Leadenham has benefited from investment in good modern equipment in the past few years, says Charlie Evans of Strutt & Parker. This includes 5,650t of grain storage, a continuous flow dryer, workshop and machinery stores, with a secondary yard on the easternmost land.

More than 9,000sq/ft of traditional buildings offer conversion potential and there are two four-bedroom farmhouses, one of which is let on an Assured Shorthold Tenancy. A three-bedroom bungalow is occupied by an employee and there is a further worker’s flat converted from a traditional barn.

“This is a completely commercial farm with no investment needed,” said Mr Evans.

With just over 419ha (almost 1,036 acres) to the north of Cranwell, High Dyke has three main blocks of slightly undulating arable land and small woods and plantations.

The farm has been lotted into four with a guide price of £7.6m for the whole, with almost 400 single farm payment entitlements included. An Entry Level Stewardship Scheme agreement runs until 31 August 2015 with an annual income of £11,956. Both farms are in a Nitrate Vulnerable Zone

Lodge Farm at Mareham Lane on the edge of Sleaford is block cropped as one unit with High Dyke and has just over 200ha (494 acres) of level grade 3 land in a single block. Lodge Farm is mainly Denchworth series soil and is all in oilseed rape.

Land drains were put in in 1998 and the long term average wheat yield is 9t/ha (3.6t/acre), says Mr Evans. The modern four-bedroom farmhouse is occupied by the farm’s single employee and there is a 1,000t grain store.

Part of the farm is on the southern edge of Sleaford, with possible development opportunities. Lodge Farm has a guide price of £3.325m to include 191.55 sfp entitlements. The sale includes a clause requiring payment to the vendor of 25% of any increase in value created by planning permission being granted for a non agricultural use for 75 years from completion.

VAT will be charged on the non residential proportion of the final price on both farms.