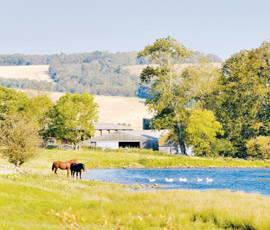 The shortage of larger mixed farms on the market means that Chapel Mains Farm, Lauderdale, will draw great interest.

This is a productive arable and stock farm just 30 miles from Edinburgh with almost 270ha (667 acres) of grade 3 land and whose owners are selling to move to a larger farm.

Strutt & Parker has set an overall guide price of £3.795m but has also lotted Chapel Mains into seven.

The first three of these essentially include the strictly farming elements of the holding – the farmhouse, buildings and farmland, with a guide price of £3m. “The key to this sale is the lotting and the farm is going to attract the commercial arable farmer,” said Tom Stewart-Moore of Strutt & Parker’s Edinburgh office.

Although currently in mixed use, all of the land here is ploughable, offering arable farmers a unit of a size which has rarely been available in Scotland in recent years.

The main of these farming lots is the five-bedroom traditional farmhouse with a good range of traditional and modern farm buildings and 94ha (233 acres) of land, most of which is arable.

Just over 75ha (186 acres) of land at South Blainslie makes up the second lot, again predominantly arable but with 1.5 acres of permanent pasture and 3.7 acres of woodland.

The 97ha (240 acres) in lot three is mainly bare arable land at Cocklee but includes a small area of permanent pasture and 44.5 acres of woodland.

Most of the land at Chapel Mains is classed as grade 3(2) on the Macaulay Institute scale. The farm has been much improved since the current owners bought it in 1994 and includes more than four kilometres of new fencing in the last five years.

Almost half of the farm is currently in arable crops of winter wheat, oilseed rape, barley and spring barley. It also carries 90-head of Limousin and Belgian blue cross suckler cows and 350 Mule ewes with the lambs finished on the farm.

Until last year the farm had been in a five-year organic system based on clover rich grazing.

The remaining lots are mainly residential, including a new six-bedroom house with about 6.5 acres and further development potential, two semi-detached cottages and a building plot with outline planning consent for a four-bedroom house. (Strutt & Parker 0131 226 2500)