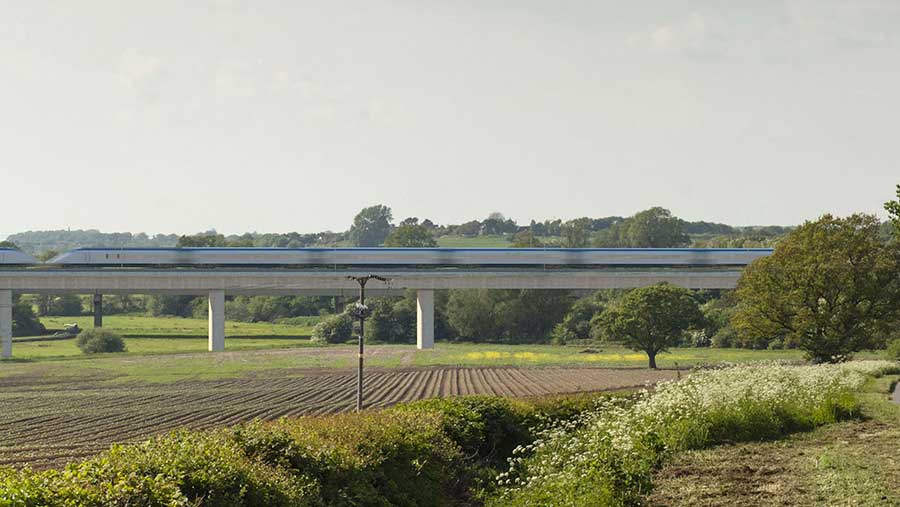 Landowners are pushing for changes to the HS2 Hybrid Bill which they say will be fairer for anyone losing land to the high-speed rail link and will also save taxpayers’ money.

“We are appealing directly to HS2 Ltd at this critical stage of the process to address its significant failures in engaging with land and property owners under threat of compulsory purchase,” he said.

See also: HS2 Phase 2a to have a significant impact on 58 farms

“The company must accept commonsense changes in law which go some way to reducing the impact on those losing land to the route, preventing further stress and delays and cost to the taxpayer.”

The CLA has called for the bill to introduce a Duty of Care which clearly sets out how HS2 Ltd must communicate and consult with affected landowners and include a mechanism for farmers to be able to challenge decisions quickly and easily.

It claims there have been inconsistencies in the approach taken to date, which has led to inaccuracies and runs the risk of poor decisions being made.

For example, the issue of where to site compensatory habitat was not discussed with landowners before the HS2 Environmental Statement was published.

“If landowners had been consulted, better locations for habitat would be achieved, so rather than trying to recreate woodland next to the railway it could be located near existing ancient woodland, or near existing high-value wetland sites,” said CLA chief surveyor Andrew Shirley.

The CLA’s second demand is for a commitment that the company will not permanently take any land that it knows it only needs on a temporary basis.

“There is a permanent land requirement for the track-bed of the railway, but other sites that will be used for temporary worksites or soil storage may not be required permanently,” said Mr Shirley.

The CLA’s final demand is for HS2 to confirm that it will not purchase any more land than is required for the operation and maintenance of the railway.

NFU rural surveyor Louise Staples said the union had been lobbying for some time for the Duty of Care to require any damage caused during the construction phase to be repaired promptly to allow affected farms to continue in business.

“For example, damage to water supply, fence or crop would need to be dealt with as quickly as possible so the farm can continue running,” she said.

On the issue of land taken for compensatory habitat, the union was keen to reduce the impact on prime agricultural land.

“HS2 should negotiate the locations of landscape and habitat areas to preserve the best and most versatile farmland,” she said.

“Quality should be considered over area to be on a like-for-like basis.”