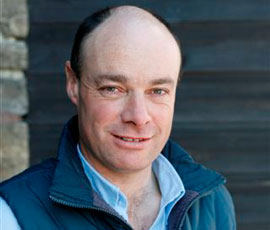 A leading farm vet is critically ill in hospital after being involved a freak accident while working with cows.

He was airlifted to Frenchay Hospital in Bristol, which specialises in neurological cases, where he remains unconscious in a “critical, but stable” condition.

Mr Darke, a director of Synergy Farm Health Limited, was diagnosed with a fractured skull and bleeding at the rear of the brain as well as severe facial injuries.

Following surgery to remove the blood clot, reduce brain pressure and assess damage, doctors said he was responding well to treatment. However, they remained cautious about predicting a recovery in the longer term.

Outside his work, Mr Darke is secretary of both the Devon Association of Ringers, and the Crewkerne Farmers’ Skittle League.

He is also joint master of Seavington Hunt, enjoys gardening and walking, and is regularly involved with his farming family in Devon.

“Jereme was taken to Frenchay Hospital, Bristol and has had two operations. Further information will be provided in due course.”


Andrew Davies, managing director of Synergy Farm Health, said: “We appreciate how devastating this news is to take and the emotions associated with it and we all know how popular and active a character Jereme is in the local and agriculture community.

“Our thoughts are very much with him and his family at this very difficult time for us all.”

The family would like to thank everyone for the overwhelming support since the accident, he added.