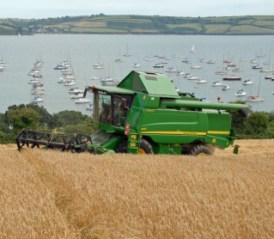 Cask beer sales from the 463 members of the Society of Independent Brewers (SIBA) rose by an estimated 7.7% in 2010, while across the UK as a whole, beer sales fell 3.9%. SIBA members are predominantly smaller brewers producing less than 0.5m litres a year.

This growth in craft local and regional brewing is providing a steadily growing market, mainly for producers of Maris Otter. Closer links between grower, maltster, merchant and brewer are developing, helping all to build on the integrity of their produce.

SIBA members’ total beer volumes have more than doubled, alongside membership numbers, since Progressive Beer Duty was introduced in 2002 by then chancellor Gordon Brown.

This levies lower alcohol duty rates on smaller brewers, helping to offset their higher input costs for ingredients, labour, overheads and transport. For 85% of SIBA’s members this means the rate of duty is cut by half.

Linking beer production with locally sourced ingredients and beers sold within a relatively small local area is a big marketing plus for brewers. “There’s a definite box to be ticked by the brewers, who are very keen to emphasise local credentials – we’re riding an ethical wave at the moment,” said SIBA chief executive, Julian Grocock.

“Even Coors makes a virtue of the fact that Carling is produced using 100% British-grown barley.”

The opportunities for farmers:

SIBA runs a direct delivery sales system for members to get access to pubs, restaurants, hotels, off licences and retailers. Ninety-four percent of these sales are delivered within a 40-mile radius of the brewery. The group’s members produce 2500 permanent cask brands, 3500 seasonal beers and occasional or one-off specials, as well as 1750 bottled brands and craft keg lagers and ales.

However, local beer production is not without its challenges, with one of the prime ones being the continued development of relationships so that trading is transparent and sustainable. It is clear that all parties want to see further work in this area.

Malting barley has to compete with other cropping options, and Maris Otter, which many of the smaller and craft brewers want, has to offer a substantial price premium over spring barleys to make up for the yield penalty, says Jonathan Arnold of Hampshire merchant Robin Appel.

Robin Appel also owns Warminster Maltings, Britain’s oldest working floor maltings using the same methods and tools employed more than 100 years ago. It offers brewers the ability to market their beers with a Warranty of Origin identifying the barley crop from which their malt is produced.

Roughly 40% of the malt made from the UK Maris Otter crop is exported to the USA, where the craft brewing business is also expanding rapidly. Although acreage down to the variety took a hit in both 2010 and 2011, an increase of up to 8000t is needed for 2012, which would take the tonnage delivered to UK maltings to 35,000t, says Mr Arnold.

Although roughly 80% of current Maris Otter growers have stuck with the crop for many years, development of contracts is needed to encourage further commitment and new growers.

The huge volatility in current grain markets enhances this need but at the same time makes it difficult to arrive at terms that protect all in the chain, says Mr Arnold.

Last year, maltsters were keen to promote long-term contracts but growers were reluctant to sign up. Mr Arnold favours a min/max type contract, which guarantees a base price to growers but allows them to benefit from an upturn, while protecting the end user from peak prices.

At present, he has commitment from growers to supply Maris Otter for the 2011 and 2012 harvests, but those not wanting to nail down a price at the time of making that commitment can fix their premium at any time in future.

“At the end of the day, regional and craft breweries are interested in quality and continuity of supply. These brewers are brewing fantastic beers and winning awards. To achieve that taste profile, they have to use top-quality ingredients.”

Philip Pryor grows 45ha (111 acres) of Maris Otter at Colwyn Farm, near Truro, representing almost 25% of his barley acreage. Much of it goes to his local St Austell Brewery.

“From a grower’s point of view, it’s nice to be part of a successful chain,” he says. “I get a lot of enjoyment from growing barley for the malting market and it’s nice to see a local company using that barley and making a success of it.”

Maris Otter fits in well with harvest workload and provides a balance to his spring malting barley. Mr Pryor sells on a variety of contract types but would like to see more stability in what is on offer for growers.

“Naturally I’d like it to be more rewarding – I’m sure everyone else is under price pressure too, but as growers we are reactive to changes – diesel has gone up 30% since we signed one of our Maris Otter contracts – but if you’re not happy to do it, you wouldn’t be growing it.”

St Austell’s head brewer, Roger Ryman, has no doubt as to the value of local ingredients to this business, which has been family owned for 160 years and whose current managing director is a fifth generation descendant of its founder. The brewery is producing more beer now than ever, with output quadrupling in the past 10 years.

Mr Ryman is keen to develop a pricing formula that will deliver sustainability and profitability for all parties. He would like to see a three-year rolling contract with built-in protection for the malt buyer but which guarantees a profit to the grower.

While barley has to go outside the county for malting, St Austell is massively increasing its commitment to malt from locally grown barley this year. Typical use has been about 20% but this year it will rise to 60%, or 1000t of malt.

“We believe very strongly in the integrity of our product. The beer we brew will only ever be as good as the material we use and we put a lot into our raw material supply relationship with growers of both malting barley and hops.

“I believe Maris Otter is the top-quality malting barley – it’s the last variety that was developed purely for its brewing quality and not its agronomic features.”