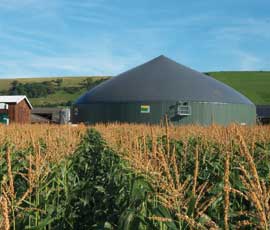 Clouds are hanging over the promising growth of farm-based biogas, according to specialists at the Anaerobic Digestion and Biogas Association’s fourth annual trade show this week. Paul Spackman reports

The number of new biogas plants coming on stream has grown considerably over the past year, but plans to cut the Feed-in Tariffs for smaller farm-scale installaztions from next April threaten to stall this emerging sector.

Specialists fear that the sub-500kW sector could face a support cut of up to 20% if the government continues with its tariff degression system. The industry is already anticipating a 10% cut in the sub-500kW category later this year. Under the system, which was brought in to avoid an unsustainable “boom” in technology uptake, such as happened with solar after the initial launch of FiTs, support for new renewable energy projects can be cut by varying amounts depending on uptake (“trigger points”).

“This degression could potentially kill small-scale AD, which can be hugely beneficial to farmers,” said ADBA chief executive Charlotte Morton. “There’s no doubt we have seen considerable growth of AD over the past year with 112 plants currently operational outside the water industry and another 130 at various stages of planning. But the threat of a 20% tariff cut from next April is creating uncertainty and affecting confidence in the smaller-scale sector and some investors are already pulling away.”

She called on ministers to urgently re-examine the degression system to ensure those developing smaller biogas plants were not unfairly disadvantaged.

This was reiterated by Cath Anthony from Bidwells, who agreed that the proposed tariff cuts could slow growth in the sector.

She said many of those with plants already in development were rushing to get planning permission and grid connection agreed before December in order to qualify for pre-accreditation of FiTs and therefore receive the existing higher support rate when plants were eventually commissioned.

“The government keeps saying it wants to see more small farm-scale AD but this degression policy seems to go against that. Funding is still one of the major issues for AD and a 20% cut could have a major impact on funders.

“For those who cannot raise debt funding from banks due to a lack of other assets to secure the loan against, there are many other investors looking for projects, however most of these need to see a higher return – typically at least 12% – to reflect the complexity of this technology compared with other renewables, such as solar.”

Ms Anthony proposed the existing separate thresholds for tariff cuts for large and small installations could be combined, so any support cut was only triggered when total AD capacity (large and small) reached a given level.

For more news and features on renewables, visit our dedicated Farm Energy area