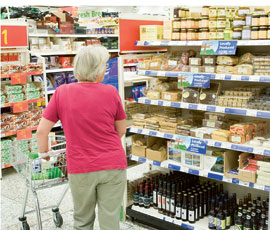 Falls in the cost of food contributed to a drop in inflation last month, according to official figures out today (15 November).

The rate of Consumer Prices Index annual inflation fell 0.2% to 5% in October, while the Retail Prices Index measure fell by a similar amount to 5.4%.

“The UK imports about one-third of all food consumed; recent studies by DEFRA show global markets play by far the biggest part in determining the prices paid by UK shoppers, although the interplay between global and local markets is very complex.”

The organisation’s ShopperTrack research, based on interviews with 1,000 shoppers, showed 84% of shoppers used price as a factor when deciding which grocery store to shop at – the highest level for a year.

Mr Walton said shoppers were also shopping around more, as the average number of store types (eg hypermarkets, discounters, online) used in the past month was 3.3, up from 3.1 in the same month in 2010.