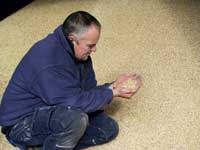 “Technically great, but financially disastrous,” is how James Scott sums up this year’s harvest.

James, who runs Fearn Farm in partnership with his son, John, and their wives, Janet and Fiona, says operationally harvest went very smoothly, but he is less than happy about where prices are going.

“Given average yield, we need about £130/t to break-even and cover our fixed costs,” says James. “Even with good yields this year we are still a long way from achieving break-even.”

The Scotts plan to cut their malting barley acreage by around 70ha (180 acres) next year as a result of this year’s experience. “Unless we get some positive signal from the maltsters by spring, our intention is to cut back substantially on our barley acreage,” says James.

The family is looking at growing a small area of beans on a trial basis instead. “We haven’t grown beans before, but distance from market could be an issue,” James says.

Despite the pressure on arable returns, there are still plans to invest around £65,000 in an Alvan Blanche grain drier and upgrade the shed which will house it. Fearn does not currently have a grain drier as all grain is sold directly off the field. But the family feels the investment will give them more options for how and when to market their cereals. They have successfully applied for a grant from the Scottish Rural Development Programme to assist with the cost.

If the reduction in the cereal area goes ahead next year, the Scotts plan to put more land into grass to help support an increase in stock numbers – their breeding ewe flock could go up by 300 head. 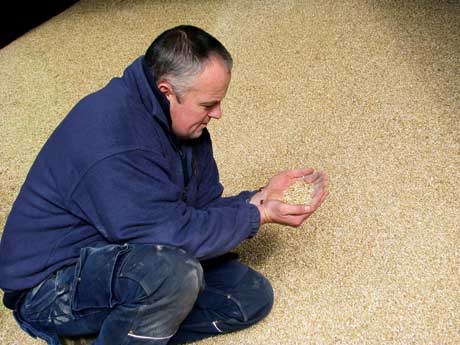 One area of the business the Scotts have no plans to scale back is their involvement in pedigree breeding. The pedigree sheep and cattle enterprises were set up 15 years ago and this year the family expects to take in about £15,000 from tup sales alone.

“There’s no doubt there is a bit of time involved and it does complicate our system, but it’s a side of the business we enjoy and the next generation is also taking an interest in pedigree breeding too,” says John. “We will definitely continue with the pedigree side of our business and if we are going to do it we want to be doing it well.”

The Scotts are clear about what they want from the pedigree livestock. “While breed characteristics are important we are more concerned about producing a commercially usable animal at a realistic price,” James says.

“Breeders tups in some breeds are totally different from commercial tups. What we are looking at now is a situation where there are really two breeds within a breed.”

While the pair enjoy pedigree breeding, they are realistic about the additional costs involved and the need to make the sums add up. “I don’t think it is worth taking a bull to Perth unless you are confident of a return of at least £4000,” he says. “Anything less than that just doesn’t add up given the cost of bringing a bull out – transport, halter-breaking and the extra time in management and paperwork.

“We aim to breed bulls worth £2500-plus and, while we are happy selling them at home, taking them to the pedigree sale ring also has a very important PR role.”

The Scotts have also been successfully selling breeding stock online via Dingwall Highland mart website. “We sold nine crossbred breeding heifers by advertising them on the mart website. They averaged £1025/head for 16-month-old Aberdeen Angus and Shorthorn bulling heifers.”

The Scott’s pedigree sheep flock contains 65 Texels and 30 Beltex ewes along with the Lleyns which are crossed.

So far this season they have sold 10 shearling Texel tups – privately and through the auction ring – to average £680. They averaged £550 for five Lleyn tups and £530 for eight Beltex tups.

Performance recording plays a major role in improving the livestock profitability at Fearn Farm. “We have performance recorded for five years and we are starting to get to where we want to be with the Texels, which are big, strong, stretchy sheep,” says John.

“These days, though, we are finding some of the best-looking sheep also have the best performance figures.

“Our Texels are about where we want them to be quality-wise and there’s no doubt EBVs have played a role in the huge progress we’ve made with them. More and more people are viewing EBVs as an important tool.”

The past few weeks have seen a major upheaval for John and Fiona Scott and family as they have moved into Fearn farmhouse, following some improvement work to the building, and rented out their house.

For more information on other Management Matters farms click here