With 4.1t lift capacity to a height of 7.1m, the Claas Scorpion 7040 Varipower Plus out-lifts Manitou’s MLT735-120 by a comfortable margin. With just a 3.5t lift capability to 6.9m, this is one argument that the French maker is not going to win. 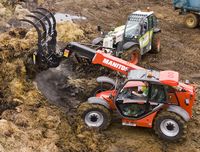 While the Germans have opted for Deutz’s latest Tier III emissions-compliant turbocharged four-pot developing 445Nm torque at 1500rpm, the French make use of a Perkins-sourced motor that uses similar technology to deliver 434Nm at a lazier 1400rpm.

Claas, however, holds a trick up its sleeve – the Scorpion can be fitted with a gutsier 140hp engine, if you’re prepared to dig deep.

From the outside, the Scorpion looks stylish with its curved cab and long, swooping windscreen. And visibility is not obstructed by a cross-member like it is in Manitou’s new Evolution cab.

Despite this, the French maker’s cabin is well finished and has much clearer instrumentation with good analogue dials that are are no longer obscured.

The Manitou’s trim has evolved from drab browns to light bluey-greys, adding a modern feel to the interior. It’s now a nice place to sit and the operator benefits from an improved heating and ventilation system as part of the Evolution cab upgrade. Key to this is a vent below the steering column, keeping the nether regions from over-heating during those long, hot days.

By comparison, getting into the Scorpion’s cab is not as convenient, a result of the step being tucked a little too far underneath the cab floor. We also found ourselves grabbing the steering wheel to get into the cab, as the grab handle is angled too far inside.

It is a bright interior, though let down by poor instrumentation and just too many buttons and switches for everyday, multi-operator use. But a seat-mounted joystick makes using the Scorpion more comfortable than Manitou’s console-mounted lever, which gets closer or further away from you, depending on how you position the seat for legroom.

But this is a trade-off that many will be prepared to accept when you reach for the joystick, as this is one of the MLT’s trump cards. 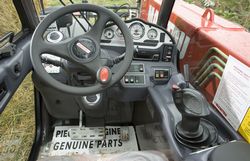 Two slide switches on the side of the mushroom-shaped lever fall under your thumb to handle the third service and telescopic boom section. A red-coloured rocker switch with a neutral position engages forward and reverse and is operated by your index finger. Alongside it live the buttons for the six forward x three reverse powershift.

Without a steering column-mounted shuttle, you soon get used to keeping your left hand on the wheel and your right hand on the joystick. It’s a controller that also has a good range of movement, making fine control easy.

Claas’s shuttle controller is less conspicuous and is neither colour-coded nor obvious in its location.

Let us explain: Flicking the obvious-looking lever on the steering column only gets the indicators flashing. Eventually, we found that the shuttle resides on the joystick as a thumb-operated roller switch. Confusingly, it sits right alongside an identical roller that is used for telescoping the boom.

An extra rocker switch on the back of the joystick operates the auxiliary service, which was used for our muck grab, while buttons on the face of the joystick include diff-lock and neutral functions, as that shuttle roller really does select just forward or reverse.

And that roller has a hard ridge across it – no doubt to give feel as a reference point – which gives your thumb hell with repeated use. The Scorpion’s handbrake is controlled by a switch, too, and this has to be applied to start the engine, which is good practice if not a little infuriating at times.

The Scorpion has a two-speed, 40kph hydrostatic transmission that cleverly limits speed to just 20k when all-wheel steering is selected. Getting the higher speed requires front-wheel steering to be selected, making road travel much safer. There is also an effective boom suspension system, which can be set to intervene automatically at speeds above 7kph.

And does it push. And push, and push. Without a torque converter, the Scorpion can be abrupt in its movements when the throttle is applied and released as if it were an on/off switch. But the left foot pedal doubles as a speed controller, so a squeeze of the pedal starts to vary hydrostatic aggressiveness, enabling a shrewd operator to dabble with both feet to blend engine revs and forward speed to make the most of traction and hydraulic performance, rather than simply charging headlong into a task and attempting to hold everything back on the brakes. 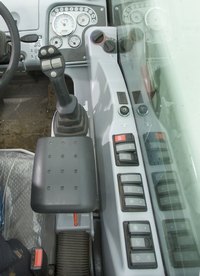 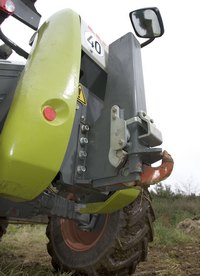 The Scorpion 7040 also has Variopower Plus, which in addition to the swash plate pump has a gear pump that diverts extra power to the hydrostatic drive. Claas says this comes into its own when the handler is used to tow a trailer.

The MLT 735-120, however, uses a six-speed powershift transmission, with torque converter and 40kph road speed. It is less forgiving when you want to combine maximum hydraulic performance and minimum travel – it demands a heavy left foot on the 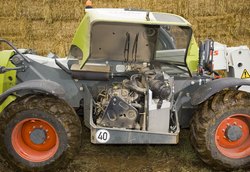 brakes, or a flick of the transmission switch in search of neutral.

Changing steering modes on the Manitou simply needs a push or pull of a lever, that can be set in any one of three positions – the latest generation Scorpions are said to be just as simple, but our test model had the old switch-setting for just two modes – getting the Scorpion into crab steering mode is tedious and requires a read of the operator’s manual.

Lifting the bonnets on both reveals good service access, and both machines use bolt-on plates around the chassis that need to be taken off to access various filters when servicing. A reverse-drive fan is standard spec for both the French and German.

Both these telehandlers have generous hydraulic performance and the ability to do two jobs at once.

The 150-litre/min variable flow, swash-plate pump on the Manitou has plenty of power and you are never left waiting it’s a load sensing system, too, which works progressively and smoothly.

The Claas Scorpion is equally as powerful, but if you are telescoping the boom and decide to change direction, then your thumb has to switch between two buttons, which is poor. We would like Claas to make this machine much more user friendly.

Both telehandlers use a centralised grease bank on the rear axle, which makes day-to-day lubrication much more straightforward. Trailer hitches and brakes are standard spec on both machines and the Scorpion’s version is powerful enough to lift it off the ground. Handy for those rear axle puncture repairs. 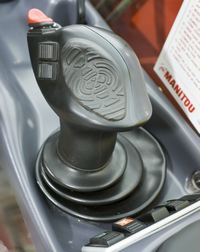 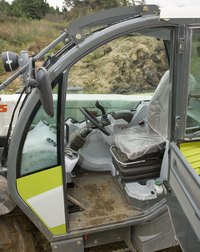 There is little to choose from between these two machines. We like the Claas’ ability to deliver traction as though it weighs 20t. It’s controllable, too, and offers great visibility with that long, curved windscreen.

But if it was our money, we would buy the Manitou. Its cab is more modern, the layout is much simpler with user-friendliness clearly in mind and that all-singing, all-dancing joystick makes long days at the controls a pleasure, not a pain. 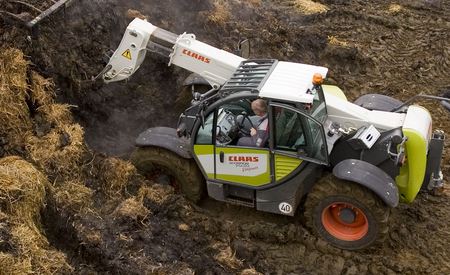