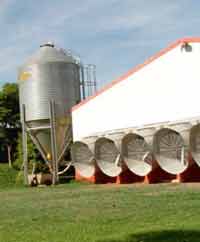 Global poultry giant Marfrig is to buy Cargill’s Brazilian poultry and pork business in a deal worth $706.2m (£434m).

Marfrig, in Sao Paulo, also owns the Moypark poultry business in Europe and will become Brazil’s second biggest poultry processor, after Brasil Foods, which was formed earlier this year after the takeover of Sadia by Perdigao.

The deal will see Marfrig take on the Seara brand and a number of breeding and slaughtering units, as well as a private port plus trading operations in the UK, Japan and Singapore. This includes export quota rights to the EU.

Another Brazilian processor making the news headlines this week is JBS, which announced it is to buy a majority stake in struggling Texas chicken giant, Pilgrim’s Pride.

Under the deal, JBS will buy a $800m (£485m) stake, which includes paying off Pilgrim’s Pride’s creditors in full and distributing new stock to current shareholders.

Pilgrims Pride said that it anticipates the plan to be confirmed by the Bankruptcy Court, allowing the company to emerge from Chapter 11 bankruptcy before the end of the year.