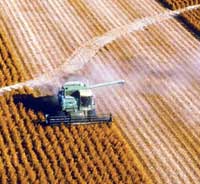 Harvest progress in the USA continues to be hampered by wet weather and late-developing soya bean and maize crops.

As of 25 October, farmers had only cut 20% of the US maize crop – well behind the five-year average of 58%. Only 90% was mature, against an average of 99%, said a report from the US Department of Agriculture. Soya bean harvest was similarly delayed, with just 44% of the crop cut compared to an average of 80%.

Markets reacted by rising sharply last week, aided by strong interest from fund buyers, which helped push British wheat and oilseed rape prices higher, too. However, Monday’s USDA crop progress report said both crops were still in good condition, and with better weather forecast this week values have since weakened.

This, combined with a stronger pound, has brought London wheat futures back down, ending the week to Wednesday (28 October) just 25p down, at £101.75/t.

David Sheppard of Gleadell Agriculture reckoned the market outlook was still negative, with the amount of grain left to sell outweighing bullish factors. “There is no shortage of wheat, barley or corn anywhere in the world at present, but fund activity has provided a welcome boost to prices. We still believe that upward spikes in prices are selling opportunities.”