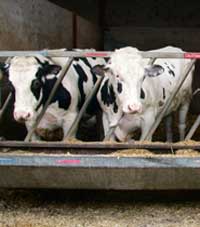 Beef carcasses in Northern Ireland showed poorer classification in the first half of this year, reflecting the increase in dairy-sired young bulls in the slaughter mix.

According to Northern Ireland’s Livestock & Meat Commission, there was a slight decline in the proportion of prime beef carcasses grading at E, U, R and O+ conformation, while those at O, O- and P had increased. “In the first half of 2009, 24.4% of prime cattle were U grades. In 2010, 23.5% were U grades,” said its latest report. “This is clearly a reflection of the changes in the slaughter mix which have occurred over the first half of 2010.”

Young bull slaughterings had increased by 55% year-on-year, with a large proportion of those from the dairy sector. “Last year only 23% of bulls killed between January and June were dairy-sired. In the first half of this year the equivalent figure was 39%.

“With O- and P grades attracting lower prices, this development has certainly had an impact on the average price paid for prime cattle.” However, fat scores had improved slightly from 4H to 4L. “This has to be regarded as positive for the industry,” the report said.