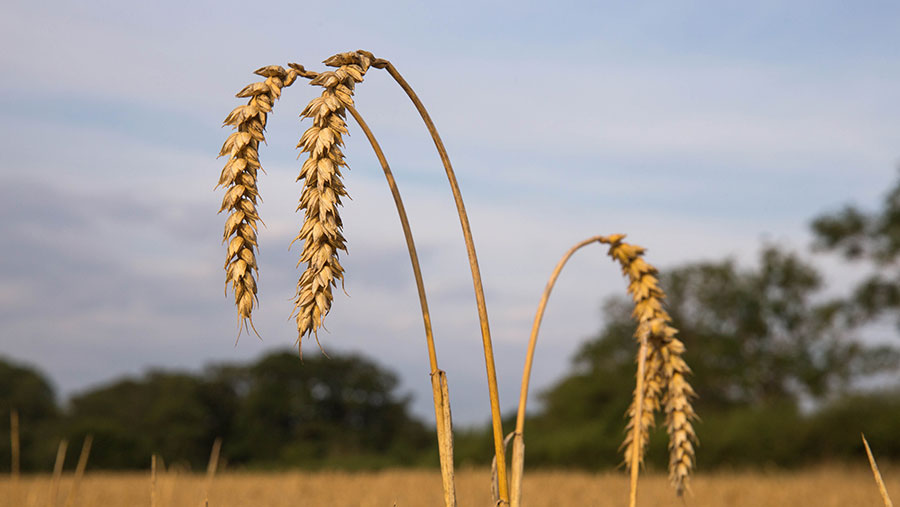 Average wheat yields in England and Wales dipped below 8t/ha for the first time in five years after a late spring and hot summer held crops back from achieving their potential.

Figures from the NFU Harvest survey stats reveal that the average wheat yield was 7.7t/ha this summer, 6% down on the five-year average of 8.2t/ha.

The results confirm what farmers have been experiencing on the ground – that the late spring and dry summer had a damaging impact on crop yields.

Arable farmers on the lightest land had the poorest yields after seeing crops burn off instead of reach maturity, leading to some of the earliest harvest dates in living memory.

However, for others on heavier land yield reductions were smaller and have been compensated for by higher prices, although these have fallen back in recent weeks from their peak.

How did other crops fare?

Spring barley also suffered a significant yield penalty after a very short growing season, dropping to an average of 5.2t/ha, 10% below the five-year average of 5.8t/ha.

However, other crops fared better, with winter barley just 2% below the five-year average at 6.9t/ha and oilseed rape just above average at 3.6t/ha.

The NFU figures are in line with Adas harvest data which predicted 7.7-8t/ha, which would put total UK wheat production at between 13.8-14.4 million tonnes.

What does this mean for prices?

This is higher than the 13m tonnes some were forecasting during the drought and goes some way to explaining why prices have fallen back from that time, traders say.

With UK wheat consumption in 2018-19 likely to be above 15m tonnes, based on an AHDB scenario forecasting average consumption, and low carryover stocks from last year’s harvest, this means higher imports than last season are likely.

The biggest impact on prices is likely to come from what happens with Russian exports, with analysts sceptical that the country can sustain the current rate it is selling wheat.

The Russian authorities are being closely watched for signs that they will impose an export tax, which wouls be highly likely to drive UK and world prices significantly higher.

Feed wheat futures rose this morning (3 October) after an announcement from the Russian agricultural safety watchdog that up to 30 loading points in two export regions could be suspended for up to 90 days for violating phytosanitary rules.