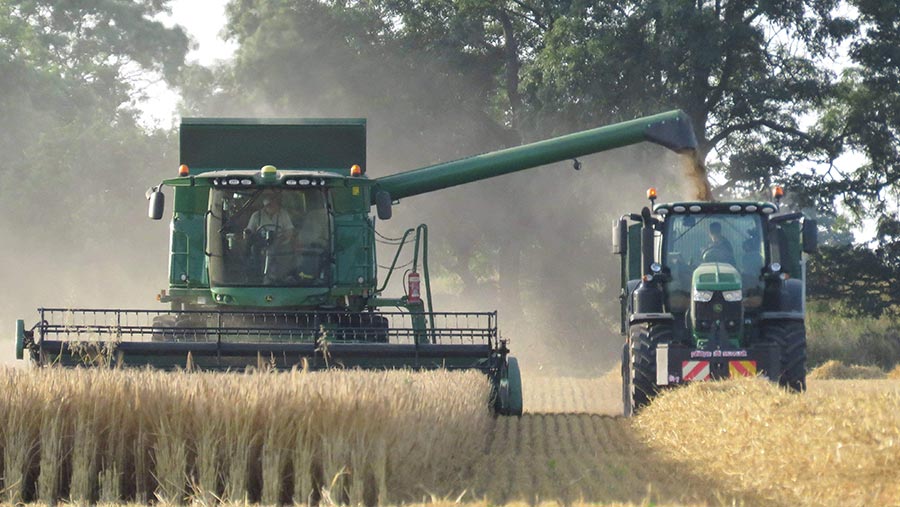 A rising grain market saw new-crop barley values gain up to £13/t in the week to Wednesday 21 July, as harvest started and some export business was done.

Around the regions there was a big variation in the barley price movement depending on location, with feed barley generally worth in the mid- to high £140s/t ex-farm.

“There is a bit of port demand to EU countries such as Portugal,” said Ian Eastwood of Cefetra’s Somerset office. “Those with a short haul to a port could make up to £150/t ex-farm.”

The gap between new-crop feed wheat and new-crop feed barley prices, at £20-£30/t in most regions, is, on average, about half that between the old-crop values. This is partly accounted for by crop areas shifting back closer to the five-year trend compared with last season.

All grains are volatile, however, with the combination of low stocks, a late harvest in the EU and UK, and dramatic weather across several continents making for a firm outlook.

Early indications of spring malting barley premiums are typically in the £15-£20/t range over feed barley values for export types with a maximum 1.85% nitrogen requirement.

For domestic malting, where a maximum nitrogen level of 1.65% is preferred, they are at about £25/t over feed values. However, at this early stage, the barley market was still finding its feet, said Ian Webster of Norfolk-based Dewing Grain, with indications of low retentions on many early barley samples.

The approach of maltsters will develop as more becomes known about overall quality and the effect of the European storms.

Wheat is trading at a premium to maize, changing the dynamics of the feed trade. It is in the northern wheat deficit areas that the feed wheat premium over barley is generally at its highest.

Buyers are scratching around for the last sweepings of wheat, pushing ex-farm prices to £200/t spot for old-crop stocks, although the shortage of transport capacity is making the logistics difficult.

A late start to the EU harvest has delayed shipment of new-crop supplies into the UK, causing spot premiums to firm as domestic supplies tighten, said ADM head of grain trading Jonathan Lane.

While the extent of the effect the rains in Germany and elsewhere will have on quality is unknown, a big downgrade could put pressure on the feed wheat market, warn traders.

Conversely, if Germany fails to produce its usually reliable high volume of milling wheat, that could see premiums rise here.

OSR prices were steady on the week, with spot values remaining high at almost £443/t ex-farm, and a seamless move from old- to new-crop in price terms, save for a £1-£3/t monthly carry in most areas.