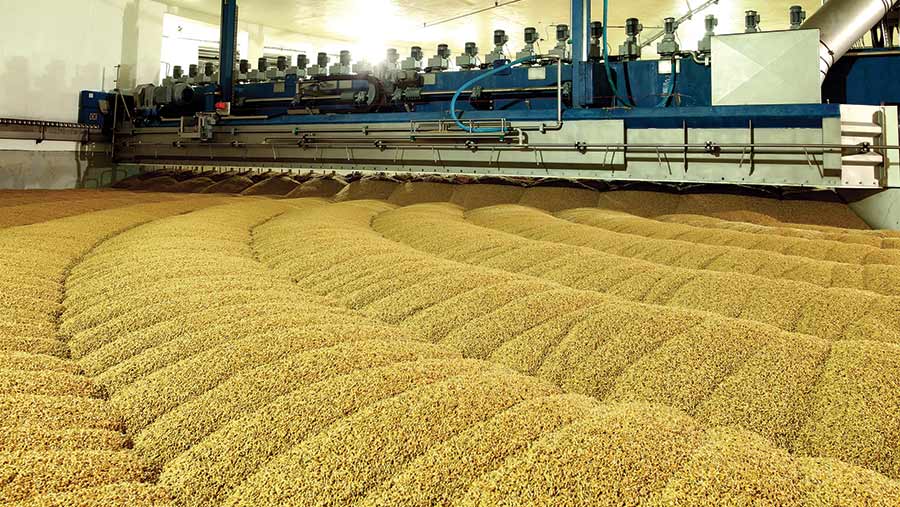 While the UK’s winter barley area has fallen, the massive rise in spring drilling means that the UK is in line for a record crop of 8.4m tonnes.

Every successive day of the recent hot, dry weather means that while this figure is under review, it will still be a big crop.

A lower area and lower yields could see the UK winter barley crop down by about a quarter on 2019. However, the rise by almost half in the spring area will more than outweigh the lower winter crop production.

The 2019 crop produced a large surplus and, at 1.5m tonnes between harvest and the end of March this year, barley exports have been at more than double the rate of the previous season.

Nevertheless, there will be a rise in end-of-season stocks exacerbated by the coronavirus effect which has seen demand for malt plummet.

Hospitality businesses including pubs will not reopen before 4 July in England, and no dates have been set for Scotland, Wales and Northern Ireland.

Some distillery sites had to close temporarily while they put in place suitable social distancing measures, and others reduced capacity.

About 13% of the malt produced in the UK is exported, and July to March exports this year were 11% lower than the same period in 2018-19, down further on the 6% decrease recorded in July to December. New figures are due on 28 May.

Carry over into next season

Maltsters will be carrying higher stocks of barley into the new cereal year on 1 July, says Bob King, chair of the Maltsters’ Association of Great Britain’s trade committee.

“There’s been a significant drop in malt production since the lockdown kicked in in March. Maltsters are doing everything they can to mitigate the effect of that. It’s not a normal year – if there ever was such a thing,” says Mr King, who is also group commercial director of Crisp Malt.

“We’re all holding malt stocks. Some maltsters are working at reduced capacity, some may have idled a smaller plant to concentrate production at a larger one.

“The whole supply trade is working very closely. Contracted tonnages will be taken by maltsters, but it may be that some of it will be taken later than originally planned.”

Mr King says that provided brewers and maltsters get about four weeks’ notice of the hospitality lockdown being eased, then production could be brought back sufficiently to meet increased demand, although the rate of that increase was very difficult to predict.

Coronavirus aside, the UK is set to leave the EU on 31 December 2020. It has been suggested that an orderly exit will mean that trade negotiations must be concluded in the next five months – by the end of October.

In the absence of a trade deal, UK barley exports into the EU are likely to face a big tariff.

Third country business with customers outside of the EU has always been important to the UK as a net exporter of barley.

While there will be good demand in markets that have been traditional customers for UK barley, the 2020 crop year will see a big stock of barley on traders’ books around the world.

Aside from the usual market factors of currency along with supply and demand, trade issues are becoming more influential in markets.

The most recent of these affecting barley is a dispute between Australia and China.

This has led to the latter imposing hefty anti-dumping tariffs on barley from the former in the past two weeks, after Australia called for an investigation into China’s handling of the Covid-19 outbreak.

This has, in turn, led to China looking to source additional supplies of malting barley from France.

For UK growers, harvest considerations could, if conditions allow, include harvesting barley at lower moistures than normal, because many third countries want it at between 13.5% and 14% moisture, rather than the more usual 15% for European markets, says AHDB.

The UK has previously exported significant volumes of feed barley to North African and some Middle Eastern states, including Saudi Arabia where it is the preferred feed grain. However, recent subsidy changes in this latter market could reduce the potential for UK exports there.

New crop values for harvest are at £118/t to £120/t ex-farm, and tentative values for malting premiums look to be similar to those of the current season at just £8/t to £12/t, say merchants.

Cefetra trader Chris Wood says: “Once the premium gets down to £8/t or less, a lot of growers are going to wonder whether it’s worth the risk of delivering it and possibly having it rejected.”

He says there have been some difficult conversations on malting barley, with the coronavirus impact meaning that some maltsters have been looking to sell grain back into the trade because of the drop in demand for beer.

However, the lower value of the pound means that there have been some useful new crop barley export deals done in the past couple of weeks.

A rise of £5/t to £7/t in the new crop price, combined with the continuing dry weather, has brought a stop to farmer selling, which has firmed the tone further.

The much lower 2020 wheat crop could mean higher barley use in feed.

While there is plenty of maize to compete with and replace wheat, wheat prices are rising and the current gap of almost £30/t between feed barley and feed wheat is making barley more attractive.

“Feed compounders will be tempted by barley,” says Mr Wood. “Corn has fallen in price to a level where an EU import tariff kicks in, so can’t go lower in euros, and barley is looking good value versus wheat and corn.”

Lower meat and dairy demand during lockdowns is likely to last to varying degrees for at least the next six-to-12 months, says AHDB, reducing feed grain demand.

However, if the dry weather continues, then supplemental feed demand will rise in the short term, and the medium term will see higher demand to make up for lower silage volume and quality.

There has been a small increase in barley use for feed in the current crop year so far – up 1.5% compared with wheat use which is up 21%.