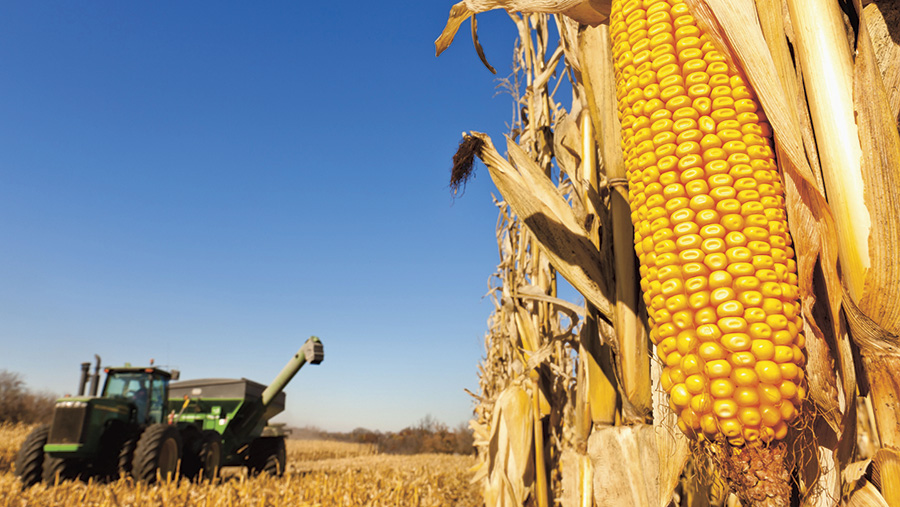 Recent better crop prices have chiefly been the result of post-Brexit weakening of the pound.

To put this into perspective, London wheat futures have risen £21/t since the referendum while French Matif futures have fallen nearly US€5/t (£4.30/t at Monday’s rate of £1=€1.16).

Without the weaker pound underpinning prices, we’re still in a depressed market.

With a good global harvest behind us and the potential for another season of strong plantings, it’s difficult to see much change.

While the long-term effects of new US trade policies can only be speculated on, last week’s news did underline the short-term situation almost perfectly.

Sterling’s sharp strengthening against the US dollar and euro post-election highlighted the vulnerability of relying on a weaker pound for price security.

However, it was the US Department of Agriculture report later the same day that revealed the true market picture.

Highlighting higher than anticipated US corn yields, the report said world corn production for 2016 is now estimated up a further 5m tonnes to 1.03bn tonnes, another new global record, with total world stocks up 1.4m tonnes to 218m tonnes.

Soya bean numbers were also, up with 2016 world production increased by 2.8m tonnes to 336m tonnes, thanks to higher US yields.

This situation is made worse by US wheat exports not being brisk enough so far.

Strong competition from a record harvest in Russia and weighty crops from Kazakhstan, Canada, Ukraine and Australia will limit the scope for any rally in US wheat.

Furthermore, Egypt’s potential to generate its usual demand is questionable, following its currency devaluation which almost doubled the cost of imports in Egyptian pounds.

Also, while severe in places, the EU’s quality problems have not created the opportunities initially anticipated.

So with huge global supply and sluggish demand, we’re left looking to the skies to see where market-changing sentiment may come from and at this time of year that means the southern hemisphere.

The Australian wheat harvest is under way and expected to be up 15 – 20% – potentially 29m tonnes compared with 24.5m tonnes last year.

In South America it’s a similar picture, with Argentina’s corn crop forecast for a record of 36m tonnes (30m tonnes in 2015). Initial wheat yields are below expectations but are these should improve as harvest moves south.

Favourable weather has allowed Brazilian farmers to race ahead with soya bean plantings.

The potential earlier harvest this gives may lead to more double-cropping next year.

So there is very little to suggest world production and stocks will reduce in the near future and it will need extreme weather to inject significant market volatility.

Some excitement could arise from the near-record number of short (sold) positions held by investors, with any signs affecting likely supply making institutions very nervous and quick to react.

This can produce rapid spikes and welcome selling opportunities for growers but the overall picture is a downward trend.

There are high stock carry-out forecasts for both wheat and corn, with no major indication of reduced planting for next year.

In the face of heavy global supply, the UK wheat market has been protected by weakening sterling and tighter supply and demand than originally thought.

A recent revision to the UK demand estimate has shown a 0.9m tonnes increase in domestic consumption over last season, largely down to higher animal feed and biofuel usage.

As a result, the exportable surplus has been cut to about 1.20m tonnes – and carry-out is reduced to 1.560m tonnes compared with last season’s end stocks of 2.792m tonnes.

Given that exports to the end of October were estimated at about 0.8m tonnes, the UK now has only 0.4m tonnes to ship with eight months of the season still to go.

Demand and prices are soon going to be very driven by the domestic market.

While the temptation might be for UK growers to hold on to grain on the recently rising market, the reality is that currency alone is shaping current fortunes.

Without that the global market is as challenging as ever in recent times.

The world sees burdensome carryout forecasts for wheat and corn. Without a significant weather problem or lower worldwide plantings, we face another low price season with grain stocks continuing to build.

Australian increases in crop and exports will weigh on the market as they start competing for export share. Russia has a record 30m tonne exportable wheat surplus to shift, even after allowing for stock building of 4m tonnes.

Although the Australian harvest is upon us it’s not a done deal, with frost damage and quality problems from excessive rain being reported. Argentine corn plantings are expected to reach 4.9m ha – up 27% on last year – although rain is an issue there, too.

Soybean seeding is generally slow but Brazil is off to a rapid start giving potential for double cropping. Uncertain economic and political conditions will be an ongoing issue.

Record fund shorts in Chicago Board of Trade wheat and corn could lead to sharp rallies if they see the need to cover positions quickly. Current dry conditions for the US Hard Red Wheat belt could affect final production.

In the UK, uncertainty about Brexit negotiations could lead to renewed weakening of the pound.