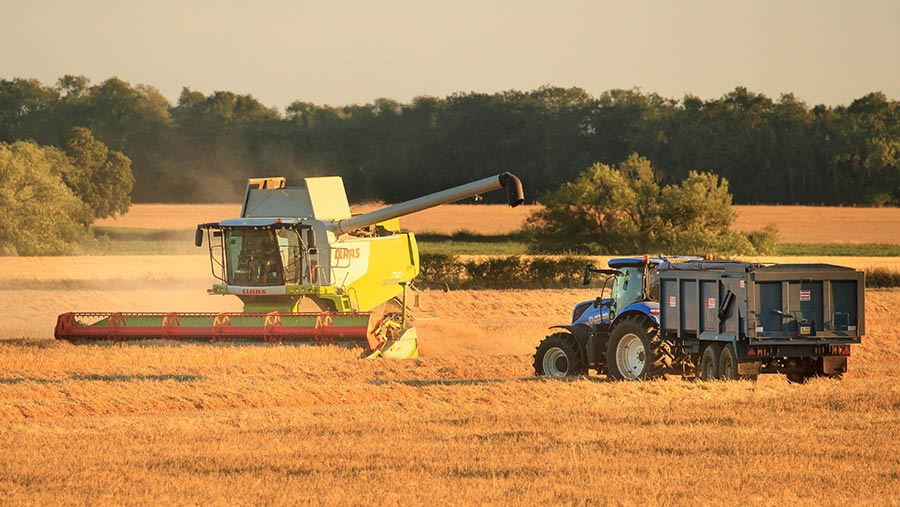 An early harvest is posing logistical challenges for growers and the grain trade.

“At the moment, it’s a case of emptying wheat out of silos quicker than the barley is coming in,” said Gary Bright, managing director of Tyneside co-op Grainco.

Most consumers are well covered and many are pushing back on grain deliveries from a barley crop that is dry and yielding well.

Growers who would usually need to get new-crop grain off the farm for drying do not have that problem this year and so the rapid start to harvest has also created pressure to clear farm stores earlier than expected.

Storage and haulage are both at a premium in many areas and the cost of finance is a key consideration for the trade.

See also: How to keep safe from overhead power lines on farmland

Markets remain volatile, moving several pounds a tonne on most days, with futures markets pushed and pulled by the weight of speculative money in soft commodities.

Midweek, UK November feed wheat futures were at £270/t, back almost to week-earlier levels after having dipped at the end of last week on further news of a possible Black Sea export corridor.

August ex-farm feed wheat values midweek ranged from £240/t to £255/t, with the higher end of the range in the North and Scotland.

Milling wheat premiums remain historically high, averaging £37/t midweek for full-spec breadmaking samples. However, the regional range of premiums is very wide, from £22/t in Kent and East Sussex, to well above £50/t in other areas.

An agreement was expected to be signed this week between Russia, Ukraine, the United Nations and Turkey to facilitate safe movement of grain from Black Sea ports.

Antonio Guterres, United Nations secretary-general, said this was a critical step to ensure the export of grain from Ukraine’s Black Sea ports and to help ease the global food crisis.

It is estimated that about 22% of Ukraine’s farmland has come under Russian control since the conflict began in February, much of it key winter wheat land.

However, the grain trade has doubts over the potential success of any export corridor.

Mr Bright said it was not in Russia’s interest to let Ukrainian grain out. “Russia has an enormous crop it wants to sell. It might have 40m-50m tonnes [of wheat] to export.”

The degree of availability of wheat from Ukraine this season would make little difference to current supply and demand, he said.

Rather, the supply problem might come next season – if Ukrainian growers cannot shift current stocks and the 2022 crop, they will not be paid for it and will not be able to finance the 2023 crop.

Glenn Mason, head of grain marketing at co-op Openfield, said much of the infrastructure around the ports had been damaged and it was not clear how long it would take to be repaired. The bigger issue would be finding shipping owners willing to operate in the region under the present circumstances, he said.

Grain market analyst CRM also reported the release of a draft document detailing a potential amendment to Russian sanctions by the EU to ease trade in food and fertilisers.

Spring varieties at maximum 1.85% nitrogen are commanding about £80/t premium over feed values for harvest, but up to £100/t for October to December movement, with an additional £10/t for nitrogen levels down to 1.65%.

Edward Hodgson, senior malting barley trader at co-op Openfield, said: “Quality is among the best ever seen, with very high bushel weights in the late 60s and low nitrogens between 1.55 and 1.65%.”

The export market is relatively quiet until more is known about the quality of the spring crop, said Mr Hodgson.

Cefetra commodity trader Willie Wright said some winter barley bushel weights were above 70kg/hl. “Buyers are quietly picking off what is being shown to them,” said Mr Wright, although distillers were being more cautious, holding back because of price volatility.