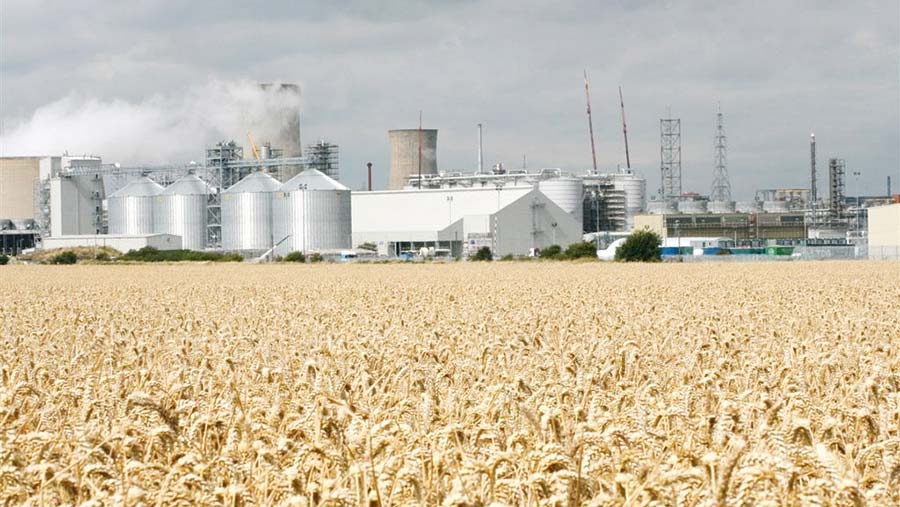 Bioethanol production at the Ensus plant in northern England will pause for an indefinite length of time from late November, removing another significant feed wheat customer from the UK market.

German biofuel producer CropEnergies said the length of the suspension at the plant in Wilton would depend on market conditions, and cited low bioethanol prices for the decision.

It can process up to 1m tonnes of feed grains annually as raw material, of which a portion will have been UK feed wheat.

However, the plant was known to have also been fed on significant amounts of imported maize.

During the suspension period, the plant will produce no ethanol and no animal feed but will remain ready for production.

Ensus was set to be the UK’s only remaining bioethanol plant and has an annual capacity of 400,000m cu of bioethanol and 350,000t of dried protein animal feed called distiller’s dried grains with solubles (DDGS).

On 10 October, CropEnergies said part of the reason behind weak global ethanol prices was because low sugar and maize prices were encouraging higher production.

Feed wheat prices have fallen by £5/t on the week to £165/t (24 October) as traders react to a rising surplus of wheat on the UK market.

In September, fellow bioethanol producer Vivergo Fuels announced it was ceasing production for good at the end of the month, and on 1 October, breadmaker Hovis announced that it was to close its milling facility in Southampton.

Fengrain managing director Rob Munro said that the combined impact of these closures had taken 1m tonnes of demand out of the market while imports of wheat and maize continued.

“All of a sudden the UK looks awash with wheat,” he said, warning that there was a prospect of further falls in the short-term as spot feed wheat prices were still trading at a premium to next year’s futures price and the UK was still priced too high to export.

NFU combinable crops board chairman Tom Bradshaw called the announcement “yet another blow” for the UK grain industry.

“The current market conditions are extremely difficult and this announcement serves to highlight the need for policy that will support the renewable energy sector,” said Mr Bradshaw.

“The closure could also have knock-on implications for animal feed supplies and, at a time when livestock farmers are already suffering with feed shortages, could mean an increased reliance on imported animal feed protein.

“Biofuels have a big role to play in delivering a green Brexit and need to be more widely embraced. We continue to call on the government to fast-track the introduction of E10 petrol to the UK fuel mix.”