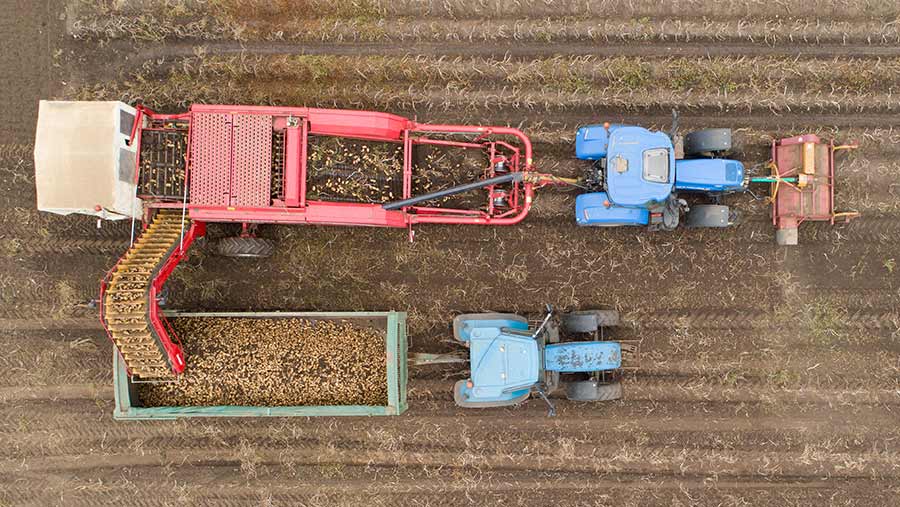 The UK potato crop could be cut back this year, with many growers lacking confidence in the wake of the coronavirus pandemic.

Potato areas are on a downward trend with a 2% decline projected for 2021 to 115,600ha, according to AHDB figures.

But AHDB analyst Anthony Speight said the impact of Covid-19 could see it slump to as low as 106,000ha.

Mr Speight said Covid-19 emerged at one of the worst possible times in the growing cycle, with producers unable to reduce areas by the time the pandemic took hold.

This year the AHDB weekly average price survey suggests values at £168/t are trailing the 2019 figure by £9/t.

The following year there was a 7.5% reduction in plantings as a result.

Mr Speight said the projected overall decline could mask steeper drops in different regions and depending on whether the grower was in the free-buy sector or under contract.

“Even though we are possibly expecting the area across the board to reduce, what we do know is that sectors that are free-buy focused will drop significantly more than contracts.”

The key to the scale of any reduction in area would be if contracts for the processing sector dropped.

If contract prices offered were low, this could cause a significant reduction in area, he suggested.

Historically the area grown closely follows the price of the year before, but the variations can differ regionally. For example, smaller growing areas such as the North East, North West and South West England have had the largest variance in potato area change since 2011.

In the North West, the potato area increased by 11% following the high-priced year of 2012. But it fell by 22% in 2020, following the price drop a year earlier.

In contrast the East of England and the East Midlands show the least variation in area depending on prices and are relatively stable despite the market climate.