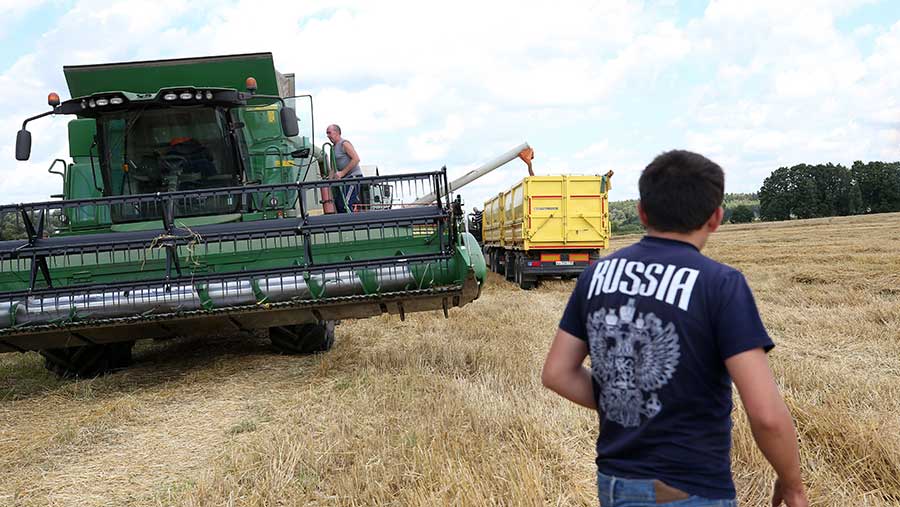 Russia’s record-breaking export drive has finally slowed, but it could be too late for hopeful US and EU markets to benefit significantly, says Cofco UK trading director Stuart Shiells.

World grain trade has been almost overwhelmed by Russia’s unprecedented rate of exports over the first half of the season, with 24 million tonnes of wheat pushed on to markets, effectively killing demand for wheat from any other origin.

While many hoped the pace of exports would abate well before Christmas, a significant slowdown has only really been seen in the past few weeks, with domestic prices in Russia now rising.

Despite many believing an export ban would be needed to achieve this, it was largely supply and demand dynamics that won the day, with a little help from tighter phytosanitary controls.

However, all this feels too late for the expectant US and EU markets waiting for the opportunity to take over when Russia ran out of steam.

EU and Us well behind

While there is enough demand to keep the market supported, there is still strong competition to make sales and consumers seem well covered.

In truth, EU and US prices can’t afford to rally substantially. Supply and demand is well-balanced globally and although Russian exports have slowed, it still has another 12 million tonnes of a 36 million-tonne export surplus to ship.

The EU and US are well behind where they need to be from an export perspective and although they are starting to win demand, they must remain competitive to make headway.

Even though the next harvest is several months away, traders are mindful of the potential for a sharp recovery in production.

The recent US federal government shutdown starved the market of vital US data but last week’s eagerly awaited US Department of Agriculture report made little impact on overall sentiment.

With a relatively benign start to the year, global weather is doing little to change supply predictions. Unless we see a sharp drop in temperatures soon, it seems unlikely that prices will gain much help from the weather in the short term.

Real crop issues develop in late spring and summer, however, so there is plenty of time for price volatility to become a feature of 2019 markets.

UK faces its own issues

World events play a part in UK fortunes but we have existed largely in our own trade bubble in recent weeks.

Regardless of global supply and demand, Brexit and its effect on the pound remains the biggest threat to UK prices in the short to medium term.

Prices here have fallen since the start of the year, largely due to the strengthening pound, with May futures at their lowest since November 2018. However international prices have remained supported.

Although there is some debate about domestic wheat production for 2018, the UK supply is relatively tight and it is inevitable we will be going into next season with low stocks.

However, if anything, new-crop prices look too high and have the potential to fall further if the good weather around the world continues and the anticipated rise in global grain production materialises.

News of any crop failures worldwide could, therefore, add interest and short-term selling opportunities as spring approaches and the next Brexit developments take shape.

Predictions of a significant increase in global grain supply next season are keeping markets under pressure. There is also no shortage of grain in the world at present.

It’s early in the year and there’s time for many scenarios to play out. Although no major threats are visible, any hint of a developing weather story could significantly unsettle markets.

Green: Factors exerting upward pressure on prices – 20%
A trade agreement between the US and China could help support markets significantly, especially if it includes a large volume of wheat. Russian export slowing is finally enabling the EU and US to make much needed export sales.