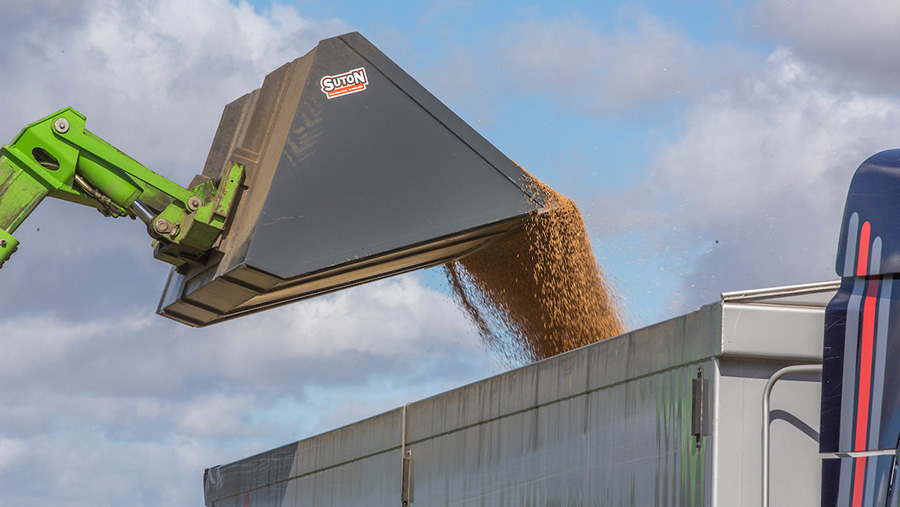 Ex-farm feed wheat prices collated by Farmers Weekly on 18 March averaged £287/t for March collection, down by £2/t on the previous week. Prices ranged from £280/t in Norfolk and Suffolk to £303/t in Northumberland.

Exceptionally high feed wheat prices are encouraging purchasers to look at alternatives, which is driving demand for feed barley.

See also: What AHDB Cereals and Oilseeds spends its levy cash on

The gap between feed barley and feed wheat prices has narrowed, with feed barley now at a £14 discount, compared to a £20 discount this time last week.

UK milling wheat has dropped by more than £6/t on the previous week to average £305/t. This puts milling wheat at a premium of £17/t to feed wheat. However, calls from industry advisers and experts suggest a premium of at least £30/t is needed to cover additional input costs from high fertiliser prices.

Grain traders have indicated that markets have tempered slightly from the record highs of last week, but remain volatile and particularly reactive to news concerning Russia and Ukraine.

The ongoing conflict between Russia and Ukraine continues to affect global grain markets. While markets remain fairly volatile, they have shown signs of easing in recent days.

“In addition, Stratégie Grains has raised its forecast for EU-27 wheat exports by 2m tonnes, to 32.5m tonnes, as a result of reductions in shipments coming from the Black Sea.”

Several other market drivers are likely to affect global markets, aside from conflict in the Black Sea region. Industry reports suggest adverse weather could hit spring plantings in China, which is expected to support prices.

Dry conditions and poor winter wheat crop conditions in the US have been a supportive factor for markets, according to the firm.

Recent gains in oil markets are being attributed to supply shortage concerns, according to CRM Agri.

Looking forward, CRM Agri said: “With war continuing in Ukraine and building covid cases in China, this level of volatility is likely to persist as both supply and demand for energy and commodities in general are questioned.”