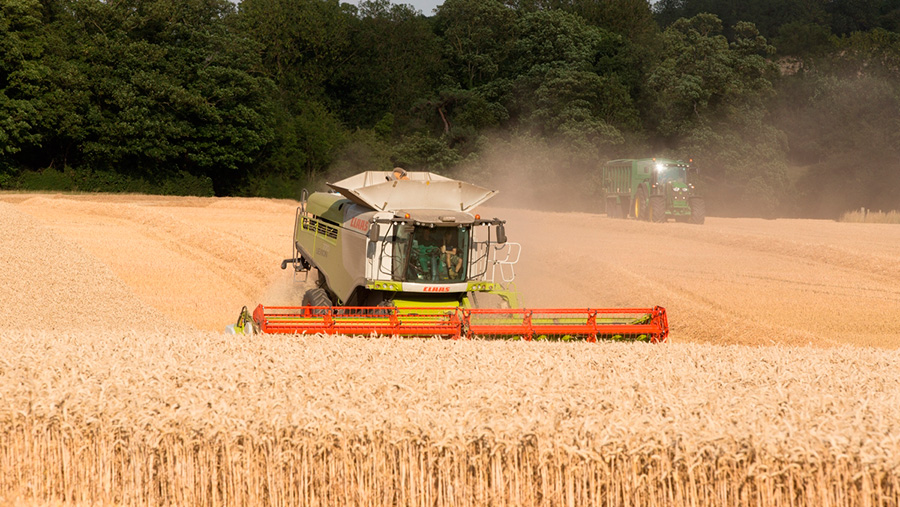 Big crops around the world are pushing wheat prices down, with ex-farm values losing about £2/t on Tuesday (30 August), in line with a fall on futures markets.

This put spot ex-farm values anywhere between £110/t (North East Scotland) and £120/t (Yorkshire), a drop of about £10/t off the top of the market in mid-August.

However ex-farm sales are slow, with growers resisting the lower prices and the trade not desperate for supply, said Openfield wheat and barley trader Alec Tindal.

Many of those who needed to sell had taken advantage of the better prices a couple of weeks ago, he said.

The main factors behind the price drop fall are good wheat crops in important producer countries, including Russia.

There is also pressure from the expectation of huge US wheat and maize crops – US wheat prices are at their lowest for 10 years.

Publication last week by by Defra of record end-of-season UK cereal stocks at the close of the 2015-16 cereal year also fed the fall.

The figure excludes on farm stocks in Scotland and Northern Ireland. Also, exports may have been higher than anticipated in the final weeks of the season as the pound fell.

At 770,000t, barley stocks were 2.2% lower at the end of 2015-16 than in the previous season, in line with what had been expected after a rise in the use of the grain for animal feed and strong exports which reached almost 2m tonnes.

The wheat market is complex – quality concerns in Germany have risen, Russian yields and quality have also been affected by rain although Russian wheat crop forecasts are still rising, with the latest at 73m tonnes compared with almost 62m tonnes last year.

Russia continues to win export business but EU exports have also got off to a very good start.

Quality problems are keeping continental milling premiums firm but these are variable in the UK, averaging £15/t for full spec material but in a range from just £7.50/t spot in the far South East to £25/t in more central counties.

Spot feed barley is worth about £14/t less than wheat, offering the prospect of more feed market interest, while malting premiums are stable at £20-£25/t as spring barley yields and quality improve.