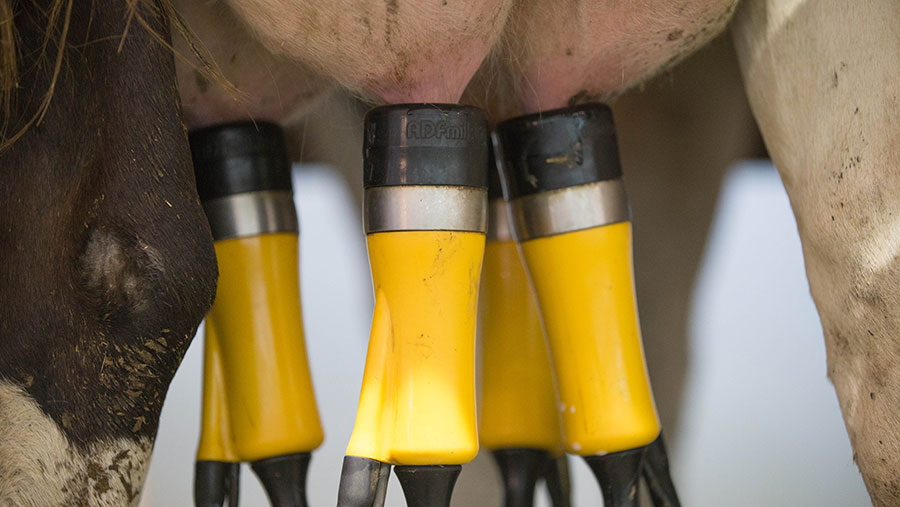 Muller shocked the dairy industry with one of the largest milk price cuts of 2019, slashing its farmgate price by 1.25p/litre.

The move provoked the Muller Milk Group (MMG), the processor’s elected farmer board, to take the unprecedented step of releasing a statement warning of “unsustainable returns” for the UK’s dairy farmers.

See also: 7 ways to lift profits on your dairy farm

Producers are currently leaving the industry at an accelerated pace, with 177, totalling almost 2% of the UK’s dairy farmers, quitting the industry between January 2018 and 2019.

The MMG released a comprehensive statement, the first of its kind for the two-year-old board, which is chaired by David Herdman.

The board estimated that non-aligned producers were missing out on 4.76p/litre compared with their aligned cousins, equivalent to £71,400 a farm or £46.4m across its pool of 650 Direct producers for a farm producing 1.5 million litres a year.

Mr Herdman said: ““The past few months have seen unprecedented increases in unavoidable farm costs for all MMG suppliers.”

“The rise in costs, coupled with Muller’s decision to drop the farmgate price to 26.25ppl, has left many Muller Direct farmers in a dire financial position.

“Unless some economic realities can return margins in the liquid market place, then the prospects for future milk production from farms exposed to this sector must be called into significant doubt.”

“At times like this in the market cycle it is important that processors retain the flexibility to be able to offer different solutions,” said Muller milk supply director Rob Hutchison.

Mr Hutchison added that farmers who signed up to the Muller fixed price contract had significant protection from current market volatility.

Production defied forecasts, increasing steadily through the second half of 2018 and hitting a 25-year high in December at 1,234 million litres.

Muller is sending a message to the industry

Mr Potter said the message Muller was sending to the industry was clear: “We can’t make money in the UK liquid market having invested a shedload of money. The NFU is insisting farmers share the risks and rewards with milk processors. Consequently we have cut the farmer milk price to share the risks and lack of rewards with our farmer suppliers, just as the NFU is insisting.”

He added that Muller had reacted to a number of organisations irresponsibly scaremongering that winter production would be hit by last summer’s drought.

“The reality is the opposite has occurred with a significant production surge.

“Muller, and others, are having to handle the biggest GB milk output for more than 25 years and says it simply cannot absorb the extra milk and associated cost especially in the ridiculously cut-throat and margin-less liquid packing business.”

The fall is worse than at first glance

“This announcement is a bitter disappointment to NFU Scotland and our milk committee as we consider this to be a clear step backwards in the market, which creates serious concerns around Muller’s profitability,” says milk chairman John Smith.

“On the face of it the price drop is a significant one, but when you take into consideration that the Muller direct bonus for Muller farmers won’t kick in until January 2020, this price drop is actually down as low as 26.25p/litre rather than their reported 26.75p/litre.

“With such a stark difference in prices and no obvious reason for it, Muller has to look at its practices and realise that it is not currently contributing to a fair supply chain.

“These margins are only amplified by the high costs dairy farmers are currently dealing with this winter, with fodder and bedding at such a premium following last year’s difficult weather.

“The market needs to improve going forward and NFUS is keen to sit down with Muller representatives to gain a better understanding of where this pressure, which is pushing prices down, is coming from.”

Milk prices in UK set largely by a) the market b) competition with other buyers in the milk fields and desire to retain farmers c) reputational and leadership aspirations.
Muller’s desire for ROI now seemingly out ranks b) and c).
Theo run out of patience?

Mr Walkland tweeted on Thursday (31 January): “Milk prices in the UK are set largely by a) the market, b) competition with other buyers in the milk field and desire to retain farmer and c) reputational and leadership aspirations.

“Muller’s desire for (return on investment) now seemingly outranks B and C.”

Mr Walkland then questioned whether Muller chief executive Theo Muller had run out of patience with the difficult margins inherent within the UK liquid milk market.

Returns in the UK liquid milk are infamously tight, believed to be around 1%, according Mr Walkland.

Don’t buy milk with the Muller label on it

Mr Darwent posted on the Farmers Weekly Facebook page: “Following the long dry summer, dairy industry experts forecast that it would cost between 31p and 32p to produce a litre of milk on farms by the end of this winter. This is largely due to increased feed costs, caused by a shortage of forage conserved for winter feed.”

Mr Darwent added that the latest Muller cut would be disastrous for farmers and urged consumers to steer clear of the processor’s milk.

“If you see milk on the shelf carrying the Muller label, please don’t buy it. Please show you care about the farmers and cows that produce your milk by voting with your purse. STOP THE DROP!

“If big dairies continue to put pressure on farmers like this, all we will be left with is big, intensive farms producing milk at the lowest possible cost – whatever that means for the cows.”